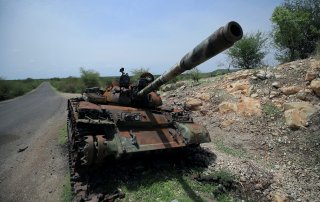 Ethiopian prime minister Abiy Ahmed’s attack on Ethiopia’s Tigray province last November was a monumental mistake. Abiy ordered Ethiopian forces into the region after the local Tigrayan leadership pushed forward with elections against his orders. Abiy dug Ethiopia deeper into a hole by targeting the old guard among the Tigray People's Liberation Front. The group, now shunned in Addis Ababa, was once part of the ruling coalition. Abiy saw them as rivals to eliminate. They were among the few Tigrayans committed to the idea of Ethiopia, as the younger generation of Tigrayans has little interest in a unitary Ethiopia. Abiy also hemorrhaged credibility. He insisted Ethiopian forces were victorious only to have the Tigray Defense Forces march into Tigray’s capital and capture thousands of Ethiopian soldiers.

That Tigrayan forces punched above their weight should not surprise. Traditionally, Tigray contributed a disproportionate share of the general officer corps to the Ethiopian resistance against the Derg. Mekelle is to Ethiopia what Mosul is Iraq. And, for all the demonization of the Tigray People's Liberation Front in Addis Ababa and justified criticism of its past human rights practices, the Tigray Defense Forces did retain far greater grassroots support in Tigray than the Ethiopian Army does anywhere else in the country. That Abiy now closes Tigrayan businesses in Addis Ababa is collective punishment. It exacerbates distrust and mimics the actions of Idi Amin who scapegoated ethnic Indians. And, as in Uganda, it will do irreparable harm to the economy and the fabric of society.

Abiy, however, was not the only aggressor. He coordinated the assault on Tigray with Eritrean leader Isaias Afwerki who sent Eritrean troops into the province to kill, rape, and loot. The Tigray Defense Forces victory was as much against Eritrea as Ethiopia. The question then becomes what next for the Tigrayans?

Isaias has so far refused to release the names of the dead Eritreans to their next of kin on the logic that he need not do so until the conflict ends. He may be seeking to avoid embarrassment, but the result is to give Tigrayan forces reason to consider their fight against Eritrea ongoing. Tigrayan forces have meanwhile captured hundreds if not thousands of Eritrean prisoners. Those without blood on their hands have escaped detention by joining the opposition, swelling the ranks of the Tigrayan forces.

The question now is whether Tigray Defense Forces will enter Eritrea to end a regime that was as much an aggressor against Tigray as Ethiopia’s Army but with even less legal justification. Isaias is old and in ill health. His people are demoralized. The rapid defeat of Eritrean forces in Tigray shows his weakness. Should the Tigray Defense Forces enter Eritrea or, more likely, organize and support Eritrean opposition forces, Isaias may find his own conscript army will dissolve and defect. The majority of Eritrea are cousins if not co-ethnics to Tigray and speak the same or similar languages. It is one thing to fight Ethiopian aggressors as between 1998–2000; it is another to defend an ailing dictator against Eritreans seeking to end a regime that has deprived them of both liberty and prosperity.

Another factor also suggests Eritrea may be in Tigray’s crosshairs: Ethiopia continues to hamper if not blockade aid to Tigray. Abiy may see himself as Isaias’ ally but his current efforts to starve Tigray into submission may ultimately condemn his partner. After all, if the Tigray Defense Forces have a choice between starving or creating a supply corridor to the Red Sea, the choice is simple: March into Eritrea. Isaias may believe that he will die in Eritrea and that his son will continue his rule. The next steps in the Tigray conflict will likely prove him wrong on both counts.