Could Trump Buy Greenland? Danish Officials Say It's "Not For Sale" 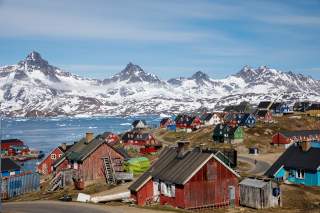 Greenland is “not for sale,” government officials there said Friday.

The response followed a story in The Wall Street Journal Thursday reporting that President Donald Trump had, “with varying degrees of seriousness, repeatedly expressed interest” in purchasing the autonomous Danish territory.

Greenland is self-ruling, but relies on Denmark to handle its foreign and security policy issues.

According to the report, “In meetings, at dinners and in passing conversations, Mr. Trump has asked advisers whether the U.S. can acquire Greenland, listened with interest when they discuss its abundant resources and geopolitical importance and, according to two of the people, has asked his White House counsel to look into the idea.”

While some advisers took the president’s suggestions seriously, others reportedly dismissed them as a “fleeting fascination that will never come to fruition.”

Following the Journal’s report, its ministry of foreign affairs issued a joking response confirming that Greenland isn’t available for purchase.

“#Greenland is rich in valuable resources such as minerals, the purest water and ice, fish stocks, seafood, renewable energy and is a new frontier for adventure tourism,” the official Greenland MFA account tweeted. “We’re open for business, not for sale.”

The tweet included a link to the territory’s official tourism website, along with an invitation to “learn more.”

Greenland’s premier also issued a statement in response to the Journal’s report this week, saying the territory was open to trade but not for sale.

“Greenland is not for sale and cannot be sold, but Greenland is open for trade and corporation with other countries — including the United States,” Premier Kim Kielsen said, according to Danish news agency Ritzau.

Trump is set to visit Denmark at the end of this month, from August 31 to September 3. The president and first lady Melania Trump are scheduled to attend “commemorative ceremonies and visit memorial sites in Warsaw … on the occasion of the 80th anniversary of the beginning of World War II.”

Trump will also meet with Queen Margrethe II, and is set to participate in several bilateral meetings and conference with business leaders.

This article originally appeared on Think Progress on August 16, 2019.

Melanie Schmitz is a senior editor at Think Progress.