Could Ukraine Actually Win Its War Against Russia? 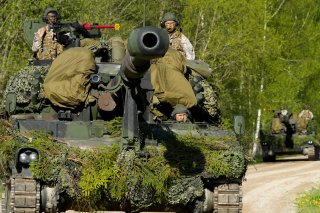 When Russian convoys, armored vehicles, and fighter jets began entering Ukraine in late February, much of the world expected a Russian victory in days or weeks. Yet, despite all of Russia’s many advantages, this has not been the case. The war continues; Ukraine still stands.

Indeed, despite surprising Russian setbacks, combat losses, logistical and supply problems, and a serious morale crisis, many believed that Russia’s numerical superior military footprint and firepower would ultimately prevail. However, after months of fighting, the besieged city of Kharkiv is largely in Ukrainian hands, Ukrainian fighters have pushed the Russians out of multiple occupied territories and all the way back to the Russian border, and Russian fighter jets still cannot achieve air superiority.

On top of this, while the Russians have reportedly learned from their logistical and tactical mistakes during their failed campaign in northern Ukraine, they are not performing much better in their new campaign in eastern Ukraine’s Donbas. In fact, Pentagon spokesman John Kirby has stated that while the Russians are making some gains in the area, they are uneven, challenged, transient, and offset by sizable Ukrainian gains as well. Essentially, Russia is not quickly prevailing in its eastern Donbas campaign, and there are widespread reports that U.S. and NATO-supplied artillery are making an enormous difference.

The tenacity, courage, and sheer will to fight among the Ukrainian defenders has captured the world’s imagination and inspired an unprecedented international effort to support Ukraine. The arrival of drones, radar, air defenses, and artillery has continued to reshape the fight in Ukraine’s favor, in no small part due to the Ukrainians’ effective and innovative use of anti-armor weapons and hit-and-run asymmetrical combat tactics.

While it is too soon to declare a victor in the Russo-Ukrainian War, it is clear that, in contrast to expectations, Ukraine has not lost. In fact, Kyiv could still “win.” What “victory” looks like for Ukraine, a nation that was invaded and threatened with destruction by its more powerful neighbor, is unclear. However, Kirby has cited the head of Ukrainian intelligence as saying that victory for Ukraine would be pushing the Russians back to their pre-2014 borders.

“...Ukraine should determine for itself what it means to win this war. What we're focused on is making sure that we give them the tools and capabilities to better defend themselves and to be successful on the battlefield,” Kirby said.