Could the U.S. Military Beat Russia and China’s Drone Swarms? 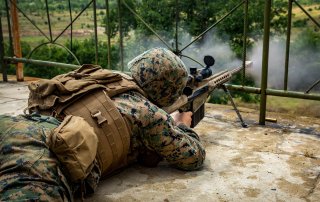 Swarms of attack drones, groups of weaponized mini-explosive drones and low-altitude, inexpensive, commercially-built and readily available air-ground and sea unmanned systems are now fast being acquired by potential U.S. adversaries such as China, Russia, and Iran, raising red flags and threat warnings throughout the Pentagon.

A newly released Pentagon report, called U.S. Department of Defense Counter-Small Unmanned Aircraft Systems Strategy, specifically cites these countries as presenting a substantial and serious small drone threat, in part due to rapid technological progress and the proliferation of that progress throughout the global commercial market.

Russia attracted global attention with its use of EW and drones during its invasion of Ukraine, as unmanned systems were used to relay targeting information for Russian air and ground attack assets.  Armed with weapons, smaller, longer-range, high-fidelity sensors and growing communications and networking coordination, Russian drones are fast-gaining new tactical abilities to attack enemies.  One of the things Russia likely worked on was ways to synchronize EW attacks, jamming and detection with drones to multiply operational possibilities.

“Russia is making sUAS platforms an integral part of its future warfare capabilities by improving its reconnaissance-fires complex and fielding reconnaissance and attack UAS,” the report states.

Along with of course tracking Chinese drone acquisition and development, the report makes a point to cite Iranian threats as well related to offensive small drone attacks.

“Iranian proxies are actively conducting kinetic operations with sUAS. The 2019 attacks on key Saudi Arabian oil facilities demonstrated how sUAS can be used to attack and disrupt critical infrastructure,” the report says.

What are the tactical implications of these countries having an increased, large-scale arsenal of minidrones? They appear substantial in a number of pressing respects, and likely to impact dismounted infantry, command and control systems, air defenses and targeting technologies as well, among other things. Air Defense radar could be either jammed or overwhelmed by groups of coordinated mini-drones able to breach the perimeter of an installation, blanketed with drone-integrated ISR targeting technology or simply tested by enemies seeking to probe the aerial boundaries of an area in need of protection.  Increased networking and coordination between multiple drones and command and control nodes exponentially increases lethality for drone small drones as they can hover, loiter, share information and pass along targeting specifics to expedite and streamline attacks.

All of these factors likely form the basis for why the Pentagon and military services are massively fast-tracking counter-drone weapons and technologies such as mobile, rotating drone detection radar systems and a range of defensive effector weapons such as lasers, EW jammers and kinetic options such as guns and interceptor missiles.  Raytheon, for example, has a technology called KuRFs radar, a rotating mobile counter-drone tracking system that integrates with networking and fire-control to pair sensors with shooters or “effectors.”  Computer systems, increasingly enabled by AI, are able to discern threat specifics, organize information and quickly identify the optimal defensive response tailored to address attack. Perhaps urban, heavily populated areas might make it less appropriate to use a kinetic interceptor such as a missile which might cause more fragmentation and explosive materials, presenting risks to civilians? Perhaps weather obscurants such as fog, rain or snow might cause laser beam attenuation, therefore requiring a kinetic or EW solution.