Could the U.S. Military Use Lasers to Kill Russia or China's Hypersonic Missiles? 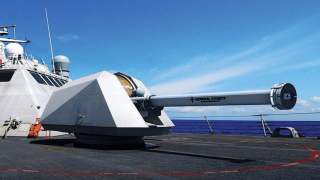 Obering’s discussion of the thermal “fragility” of hypersonic weapons is further reinforced by an interesting RAND Corporation paper which explains why hypersonic weapons have a larger heat transfer than Re-entry Bodies releasing from an ICBM. The comparison, as discussed in the RAND essay, takes up what seems to be an extremely relevant question, given that Re-entry bodies also travel at hypersonic speeds when re-entering the atmosphere.

Increased heat can bring challenges; it strengthens the weapon's thermal signature, making it easier for sensors to track. Heat challenges can also introduce difficulties by creating a need to engineer a weapon able to withstand the heat levels and remain intact during high speed flight. For this reason, hypersonic weapons -- and ICBMs as well -- are constructed with specially engineered heat-resistant materials.

The RAND essay, called “Hindering the Spread of a New Class of Weapons,” explains that heat signatures are impacted by the shape, size, velocity and trajectory of a weapon.

“The larger the nose radius, the smaller the heat transfer on the nose of the vehicle. Trajectory shaping, i.e., velocity and altitude, can also be used to manage the total heat transfer on an RV (Re-entry Vehicle) while meeting other input requirements and constraints, e.g.,range, maximum deceleration, and time of flight. Hypersonic weapons have different constraints and requirements compared with reentry bodies. HGVs(Hypersonic Glide Vehicles) and HCMs(Hypersonic Cruise Missiles) will tend to have sharp leading edges, i.e.,a small nose radius, which will increase the heat transfer,” the essay states. (RAND - Speier, Nacouzi, Lee)

Hypersonic weapons, the essay further explains, need to travel for long periods of time at high speeds, when compared to a re-entry body.. therefore…”two of the major parameters in the total heat equation, velocity and time, cannot generally be reduced,” the paper states.

Hypersonic weapons could also potentially be stopped by, as Obering put it, causing a “disruption in the air flow.” Changes in aerodynamics can break up forces such as lift, thrust and drag, Obering said.

Essentially, the idea is not to destroy the hypersonic weapon with an explosion, but rather cause an “instantaneous” angle change in the complex, interwoven mixture of air-flow variables. This, quite significantly, can cause an entire vehicle to break apart. A number of things could cause this, such as a laser, rupture of a booster, missile explosion in the vicinity of the weapon in-flight or some other kind of disruption.

Causing this kind of change would be made possible, in part, due to the fragility of certain elements of hypersonics flight, such as control, heat and aerodynamic stability.

“Igniting the engine of a hypersonic cruise missile has been compared to lighting a match in a 2,000-mile-per-hour wind. Moreover, the shape of the missile changes under the rigors of hypersonic flight, creating great challenges for flight control,” writes Richard Speier in a separate RAND essay called “Hypersonic Missiles: A New Proliferation Challenge.”