Could The U.S. Navy's War Plan Orange (For Fighting Japan) Be Used Against China? 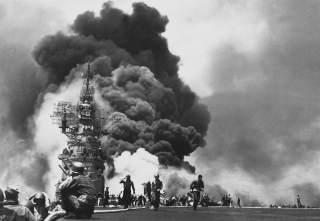 On the other hand—President Harry Truman’s wish for a one-handed economist comes to mind when pondering Pacific affairs—the strategic setting at large appears far more favorable to the United States than during the heyday of War Plan Orange. While the U.S. Navy has kept a squadron in the Far East since the presidency of Andrew Jackson, the United States has only been a resident power in Asia since the Spanish-American War ensconced it in the region. Back then its chief strategic assets were the Philippine Islands, Guam, and a series of island stepping-stones stretching back toward Hawaii. These assets were invaluable in that they assured access to Far Eastern soil. Equal partners in U.S. strategy they were not.

Washington presides over a fellowship of formidable allies that stretches from South Korea and Japan to the north to the Philippines and Australia to the south. South Korea, Japan, and Australia play host to U.S. forces, a mutual defense pact binds the Philippines to the United States, and Taiwan is an informal ally. PLA commanders, in other words, must contend with U.S. allies that occupy the offshore “first island chain” enclosing the mainland’s coastline—a geographic asset ideal for troublemaking.

Chinese commanders must also come to grips with frontline allied forces that need not battle their way overseas from Hawaii or North America to make their weight felt in Asian affairs. The U.S. Seventh Fleet and affiliated joint forces call Japan home. Together they and the Japan Self-Defense Forces comprise a potent multinational fighting force. The Republic of Korea Navy and Royal Australian Navy field imposing if compact fleets complete with Aegis destroyers. European navies are even making their return to Asia. This correlation of forces is a far cry from the early twentieth century, when the U.S. Asiatic Fleet—less a battle force than a hodgepodge of misfit ships—anchored the U.S. presence in a Western Pacific dominated by the Imperial Japanese Navy.

Such are the realities before planners. A latter-day War Plan Orange ought to rhyme with the past in certain respects while acknowledging today’s new normal. The contrast between past and present suggests a few precepts for contemporary war planning. One, an uptempo counteroffensive appears crucial. Once China grabs what it wants, there may be no reversing its gains. It’s hard to imagine the United States and its allies mounting a Normandy-scale campaign of their own to evict the PLA from Taiwan. Two, speed kills even though it’s essential. U.S. forces will encounter some of the same problems the Orange planners foresaw for a cross-Pacific rush toward Japan. Puncturing China’s anti-access defenses, girding for a duel with the PLA Navy surface fleet, and supplying adequate logistical support are just three of the challenges before U.S. planners and mariners.

But three, U.S. forces forward-deployed to the Western Pacific can expedite the Pacific Fleet’s access to regional waters and skies, working in concert with fraternal Asian armed forces. Deploying armaments along and around the first island chain would confine the PLA Navy and Air Force to the China seas, muting the impact of Beijing’s anti-access strategy. Dispatching submarines or unmanned vehicles on raids within the first island chain would throw the PLA Navy onto the defensive, distracting attention and resources from the U.S. Pacific Fleet. And on and on. Any effective war plan will put this advance guard to work, helping the Western Pacific Express arrive in time to make the difference in combat.

War planners of old deserve their encomia, but their work is not done yet. They can render yeoman service from beyond the grave, illuminating the challenges, dangers, and opportunities before the U.S. Navy today. Let’s dust off those old archives, explore the world of War Plan Orange—and grind some fresh sausage.