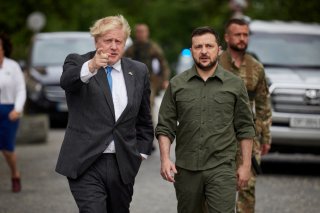 British prime minister Boris Johnson told Ukrainian president Volodymyr Zelenskyy he believes Kyiv can retake territories captured by Russian forces, a Downing Street spokesperson said, according to Reuters. Johnson and Zelenskyy reportedly discussed the latest round of British military aid to Ukraine, with the UK prime minister noting that ten self-propelled artillery systems and additional ammunition will be delivered to Ukraine in the coming weeks.

A growing chorus of Western voices, notably including former Secretary of State Henry Kissinger, has urged Ukraine to consider territorial concessions as part of a prospective peace settlement to end the war. “Negotiations need to begin in the next two months before it creates upheavals and tensions that will not be easily overcome. Ideally, the dividing line should be a return to the status quo ante,” Kissinger said at the World Economic Forum in Davos. London, which has provided extensive military and economic aid to Ukraine since the Russian invasion commenced on February 24, has consistently taken a strident position against any peace deal involving Ukrainian concessions. “To get peace and protect our way of life, Ukraine and the free world need to stay strong and united,” wrote British Foreign Secretary Liz Truss. “We must ignore the defeatist voices who insist people are beginning to tire and who propose to sell out Ukraine for a quick end to the unrelenting horror.” French president Emmanuel Macron was not as unequivocal as his British counterpart when asked about possible territorial concessions in June, telling reporters during a press conference with Zelenskyy in Kyiv “this is up to Ukraine to decide.”

Russian and Russian-aligned forces announced last week that they have captured the city of Lysychansk, the last Ukrainian stronghold in the eastern province of Luhansk. Leonid Pasechnik, head of the breakaway pro-Russian Luhansk People’s Republic (LPR), told Russian state media that July 3 will be celebrated by the separatists as the day that the LPR was “liberated” from Ukrainian control.

Zelenskyy, who acknowledged that Ukrainian forces were ordered to withdraw from the Lysychansk area last week in order to take up new defensive positions deeper within the contested Donbass region, pledged to retake the area with the help of further heavy weapons deliveries. "We will return, thanks to our tactics, thanks to the increase in the supply of modern weapons," he said in his nightly address, reaffirming that Ukraine would never “give anything up.”