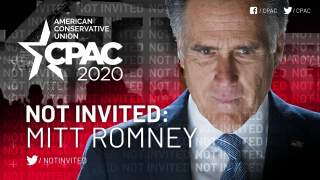 The political reverberations for Mitt Romney after last week’s impeachment vote have been immediately felt. The junior senator from Utah voted for one article of impeachment, deciding that President Donald Trump had committed an abuse of power. Now he faces the backlash from conservative voters and fellow Republican politicians.

The first consequence was being formally not invited to the annual Conservative Political Action Conference. CPAC, hosted by the American Conservative Union, was inaugurated in 1974 as a gathering for conservative activists, young people, and movement icons. For years the conference has touted their annual straw poll as an indication of who conservatives prefer for their future presidential nominee. Mitt Romney currently holds the record for most straw poll wins, including the years 2007, 2008, 2009, and 2012. Matt Schlapp, Chairman of the ACU, disinvited Romney after the senator voted to hear more witnesses at the impeachment trial, calling his tenure in office “a waste.”

Schlapp, who served as a political director under George W. Bush, elaborated his stance in a Sunday interview with Greta Van Susteren. “We won't credential him as a conservative," Schlapp said about Romney’s attendance, but "I suppose if he wants to come as a non-conservative and debate an issue with us, maybe in the future we would have him come."

“This year, I’d actually be afraid for his physical safety, people are so mad at him,” Schlapp added.

This final line engendered controversy from commentators, who were dismayed that the ACU Chairman would say he couldn’t guarantee the safety of a sitting U.S. senator and former Republican presidential nominee.

Romney’s failure to unseat incumbent President Barack Obama in 2012 has been one of the primary criticisms raised by Schlapp and other conservatives. “Mitt Romney just lost again. He never gets tired of losing,” he tweeted after Romney cast his impeachment vote on Wednesday. Schlapp also suggested that the ACU would help the Utah Republican Party defeat Romney when he’s up for reelection in 2024. Matt’s wife Mercedes previously served as White House Director of Strategic Communications in the Trump administration and is now a part of the Trump reelection campaign.

Alternatively, Romney has received praise from his Democratic colleagues, a departure from the treatment he received in the same 2012 race. “There was courage from Mitt Romney who took a very, very difficult vote,” said Senator Amy Klobuchar of Minnesota at the Democratic presidential primary debate Friday evening. Romney’s name received an ovation of applause from the Democratic audience for his impeachment vote.