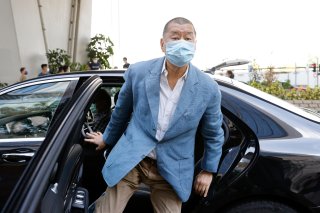 The national security trial of Jimmy Lai, a Hong Kong businessman and activist who published the pro-democracy Apple Daily newspaper until its closure in 2021, will be held without a jury under a stipulation of the “special autonomous region’s” sweeping national security law, according to local media.

Lai is scheduled to appear in court on Monday for a preliminary hearing before his trial. The hearing will be presided over by a three-judge panel, but there will be no jury present. Although the right to a trial by jury for criminal cases is normally guaranteed in Hong Kong’s legal code, the national security law, passed by the Chinese government in June 2020 following the territory’s year-long anti-Beijing demonstrations, allows cases involving the law to be heard by a panel of judges instead of a jury. The United Nations has cautioned against this provision, arguing that an “overly broad interpretation” of the national security law could lead to unjust outcomes, and one member of the UN Human Rights Committee described the national security law as “incompatible” with the International Covenant on Civil and Political Rights.

So far, only one person—pro-democracy activist Tong Ying-kit—has been tried under the law without a jury present. Tong was found guilty of “incitement to secession” by a three-judge panel in 2021 and sentenced to nine years in prison, also making him the first person to be convicted under the law.

In connection to his role at the Apple Daily, Lai has been charged with “conspiring to commit collusion with foreign forces to endanger national security, and to print, publish, sell, offer for sale, distribute, display and/or reproduce seditious publications,” according to the Hong Kong Free Press. The seventy-four-year-old activist had previously been convicted of planning a commemoration of the Tiananmen Square massacre and violating Hong Kong’s COVID-19 quarantine rules, leading to him being sentenced to nearly two years in prison.

In addition to Lai’s case, a wider case against forty-seven public figures associated with Hong Kong’s pro-democracy movement, including several former members of the Hong Kong legislature, is also expected to proceed without a jury. More than half of the forty-seven defendants have already pleaded guilty, according to local sources.

Lai’s trial has not been scheduled yet, and his lawyers have suggested that it might be delayed until late 2023 or early 2024 in order to account for the complexities of the legal case.