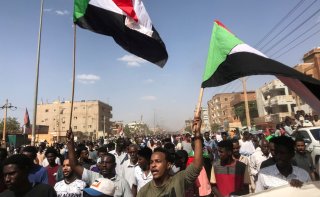 Security forces shooting live ammunition killed more than a dozen protesters in Khartoum, the capital of Sudan, during demonstrations against the October 2021 coup d’etat on Wednesday.

In spite of the government’s increasingly violent treatment of protesters, which has reportedly resulted in thirty-eight fatalities and hundreds of injuries since the military government’s seizure of power, tens of thousands of protesters have remained on the street, demonstrating against the junta and demanding a return to civilian rule.

Wednesday’s protests were held across Khartoum and in the neighboring cities of Bahri and Omdurman, according to Al Jazeera. Earlier in the day, mobile phone communications within the city were cut, in the hope that doing so would hamper protest leaders’ ability to organize.

While the government of Abdel Fattah al-Burhan, the Sudanese military leader who seized power on October 25, displayed restraint toward the protests in the first weeks following the coup, their suppression has become steadily more violent, with police and security personnel increasingly using live ammunition against demonstrators. Although the security forces have denied using live ammunition, the Central Committee of Sudanese Doctors (CCSD), the independent doctors’ union that tracks protest deaths, claimed that the government forces had “used live bullets heavily in different areas of the capital,” arguing that the use of live ammunition had led to dozens of serious gunshot wounds.

The CCSD said that the existing fatalities had mostly resulted from gunshot wounds to the head, neck, and torso. It also criticized Sudanese security forces for searching hospitals for protesters to arrest.

The Sudanese Professionals Association, an alliance of trade unions that has emerged as one of the foremost pro-democratic organizations within Sudan, blamed the military government for “immense crimes against humanity” during the suppression of the protests and accused security forces of intentionally pursuing “premeditated killings.”

In spite of the ongoing protests, Burhan has attempted to consolidate his rule in recent weeks, re-appointing a new Sovereign Council with civilian representatives and proclaiming his intention to hold free elections in 2023. The Sudanese leader has claimed that he still intends to complete a transition to civilian rule, but the military takeover was necessary to prevent the collapse of the Sudanese government.

However, the international community has largely come out against the seizure of power, with the United States, in particular, condemning Burhan's decision and freezing $700 million in aid to Sudan until he restores the civilian government.