Cracking Down On 'Birth Tourism' Will Not Make America Safer 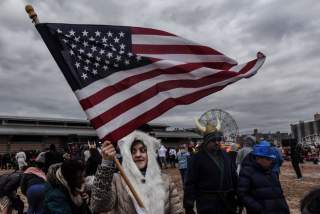 The U.S. Department of State announced a new rule for tourist visa applicants today: prove you’re not going to give birth in America. The rule will not protect national security, will create more fraud and crime, and will cost America people who will contribute productively to this nation.

The tourist visa statute allows noncitizens to visit the United States for “pleasure,” which State has always interpreted to mean “legitimate activities of a recreational character, including tourism, amusement, visits with friends or relatives, rest, medical treatment, and activities of a fraternal, social, or service nature.” — in other words, most anything. But now, “The Department is revising the definition of ‘pleasure’” (p. 2) to exclude giving birth in the United States.

The State Department asserts that the “rule addresses concerns about the attendant risks of this activity to national security.”

The previous regulation failed to address the national security vulnerability that could allow foreign governments or entities to recruit or groom U.S. citizens who were born as the result of birth tourism and raised overseas, without attachment to the United States, in manners that threaten the security of the United States.

The State Department not only doesn’t present any evidence that this is occurring or has ever occurred, but it doesn’t even explain what the threatening “manners” might be that could somehow harm America. It can’t even imagine a hypothetical scenario to give flesh and bones to nightmare. The evidence that it does provide is that “Birth tourism companies advertise their businesses abroad by promoting the citizenship‐​related benefits of giving birth in the United States” (emphasis added). In other words, these are capitalist enterprises led by the market, not governmental efforts led by foreign security agencies.

I have dug through hundreds of national security and terrorism cases over a 30‐​year period to identify the origins of the offenders, and not a single case that I have reviewed followed this fact pattern.

The State Department lists the following reasons for people choosing to give birth in the United States:

Not included on this list: developing stealth agents to (somehow) undermine America.

It’s also interesting that the State Department didn’t include the evasion of China’s 1‑child/​2‑child policy. One woman named Liou said in 2015 that she only came to the United States to “skirt China’s one‐​child policy” and will return to China after giving birth. The reason is that the child limit only applies to children born in mainland China. A Shanghai reporter assessed the situation this way in 2011:

American journalists continue to generate stories about birth tourists from China, most often explaining them as seekers of the American dream. They rarely touch on what the Chinese people, and their media, know is a leading cause of the phenomenon: an attempt to evade the Chinese government’s population controls.

This explains why — as I described in 2015—out‐​of‐​county births to mainland Chinese have spiked all around the world, not just in the United States. You would think that the State Department would want to treat people thwarting Chinese totalitarianism as potential allies, rather than threats. Obviously, these women choose to give birth in the United States rather than elsewhere because they believe their children could benefit from having the option to come and live here, but it takes a bizarre sort of nativist paranoia to see this aspiration for the American dream as a threat rather than an opportunity.

The State Department cites a few instances of birth tourism companies defrauding immigrants, hospitals, and property owners, but those actions are already illegal and this rule does nothing to stop fraud. Indeed, by banning this activity, this rule will inevitably push the industry underground and lead to more fraud. Far from protecting women seeking to give birth here, it will place them in much more vulnerable situations.

This rule has no justification other than a desire to keep out foreigners. Indeed, it repeatedly cites the fear that parents of the child could eventually receive green cards when their children reach adulthood. That’s not a fear any reasonable person would treat as a security threat. In fact, the State Department notes that the birth tourists are hoping their children will eventually return to contribute to America. How is this a problem?

The State Department is denying the public the ability to comment on the rule before it becomes finalized — as all other rules must do — because it wants to avoid having to “respond publicly to pointed questions regarding foreign policy decisions.” It must be nice to have the power to harm the lives of tens of thousands of peaceful people, all without the fear of having to answer any questions about it.