Crazy Fact: The Secondhand Smoke You Are Breathing Could Come from Another State 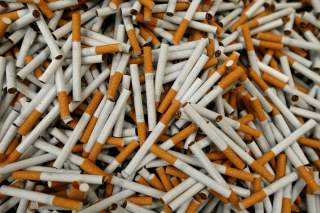 Scientists estimate that each year in the U.S., outdoor air pollution shortens the lives of about 100,000 people by one to two decades.

As it turns out, much of this pollution originates not in a person’s own neighborhood, but up to hundreds or even thousands of miles away in neighboring states. And, absent strong federal regulations, there’s very little Americans can do about it.

In a study published on Feb. 12, we used state-of-the-art modeling to estimate the number of air pollution-related deaths that combustion emissions – those from any kind of burning, from cook stoves to car engines to coal power plants – from each state have caused in every other state over the past 14 years.

On average, 41% of these air pollution deaths in the U.S. resulted from what we call “secondhand smoke” emissions that crossed state lines.

This share has been declining over time, down from 53% in 2005, thanks in large part to reductions in sulfur dioxide emissions from the electric power sector. However, not every sector, or every state, has been a success story.

The problem is like what people experience when they are exposed to secondhand cigarette smoke. The smoker endangers their own life the most, but the smoke that gets passed on still poses serious health risks to those exposed.

Outdoor air pollution works this way on a national scale. States emit pollution that, with rare exception, causes the most air quality issues for people within the same state. But that pollution also crosses state lines, leading to tens of thousands of additional early deaths.

Without strong regulations, people in neighboring states have no control over their exposure to “imported” air pollution. They will simply have to put up with it, just as restaurant diners or airline passengers used to do when seated near the smoking section.

Using computer models of the movement and chemistry of air pollution, we were able to calculate the contribution that each sector made to pollution across the country, and how this has changed over time.

For example, we calculated that over 70% of all electricity generation-related early deaths occurred outside of the state in which the emitting plant is located.

Federal regulations – such as the Cross-State Air Pollution Rule and its predecessor, the Clean Air Interstate Rule – enabled this improvement by mandating reductions in power plant emissions of sulfur dioxide and nitrogen oxides. The EPA has made huge progress in this area by any standard.

Similarly, improving emissions standards for road vehicles between 2005 and 2018 reduced the health impacts from road pollution by 50%, from around 37,000 to 18,000 early deaths per year.

Other sectors have been less successful. Although emissions from rail transportation have fallen over the same period, the total number of early deaths due to their emissions has stayed almost the same. This is due in part to the fact that the air is getting cleaner. As it does so, more pollution will form in response to the same emissions – regardless of the specific sector. Reductions in rail emissions have been too modest to compete with this change.

Meanwhile, early deaths due to emissions of fine particulate matter from the commercial and residential sectors, such as soot from heating and cooking, have increased, from around 20,000 early deaths in 2005 to 28,000 in 2018. Of these, about one-third came from activity originating in another state.

The number of deaths occurring in each state is not uniform across the U.S., even in percentage terms. The different population densities, distributions and industrial compositions of each state also play a role, as does state policy.

For example, we found that only 3% of the total U.S. early deaths caused by California’s combustion emissions are exported to other states. By contrast, Wyoming exports 96% of the early deaths from its emissions. That’s because Wyoming is small, sparsely populated, upwind of the East Coast and has a large industrial base.

For any given state, these exports are mostly balanced by imported pollution from upwind states, but there are some notable exceptions. A case in point is the Northeast, which exports much of its own emissions out to the ocean.

Overall, our findings reflect the need not only for ongoing investigation of U.S. cross-state air pollution, but also for federal regulation that’s strong enough to significantly reduce it and help save Americans’ lives.

The Clean Air Interstate and Cross-State Air Pollution Rules have brought significant improvements, reflected in the overall downward trend we find for combustion air pollution-related deaths in the U.S. over the last 14 years. But more work at the national level is needed to bring these numbers down further.

Until then, states and their residents will continue to have no refuge from their neighbors’ secondhand smoke.

Sebastian Eastham receives relevant funding from the U.S. Environmental Protection Agency, the U.S. Federal Aviation Administration, NASA, and the VoLo Foundation. He is affiliated with the MIT Joint Program on the Science and Policy of Global Change.