Crooks and Killers Can Turn Fake Guns Into Real Ones 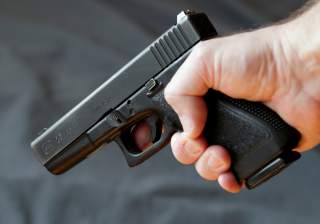 Blank-firing guns make for fun movie props and nice showpieces. But with the right tweaks, they can be just as deadly as the real thing.

According to a new report by Small Arms Survey, a non-governmental research project based in Switzerland, the conversion of blank-firing, replica and other less-than-lethal handguns, is a growing problem for countries looking to crack down on gun-related crime.

The converted guns might not work very well. But they’re cheap, disposable and largely untraceable—all attractive features to would-be crooks and assassins.

(This first appeared in WarIsBoring here in 2015.)

For as long as governments have tried to control weapons, there have been efforts to get around the rules. Today, some look to 3-D printing as a way to skirt gun regulations.

But it’s converted blank guns, mostly in the form of pistols, that are showing up in weapons seizures and at crime scenes by the thousands, signaling a large demand. In Germany, the report notes, roughly two-thirds of all firearms seized by authorities in 2012 were converted weapons.

The skills required to convert a gun from firing blanks to firing bullets aren’t hard to come by. “It’s actually quite easy,” Ben King, author of the Small Arms Survey report, tells War Is Boring.

“For some [blank-firing guns] there’ll be an obstruction in the barrel that can be screwed out or drilled out,” he adds. “That takes pretty basic tools.”

Not everyone who converts a blank-firing gun does so for criminal reasons. Some do it for the technical challenge. Others simply find it an interesting hobby. For those in need of instruction, YouTube hosts a number of video tutorials showing viewers how to convert the weapons.

t’s different in Europe, where gun laws are stricter. Scottish police have noticed that converted “showstopper” guns are increasingly being used by organized criminal groups.

Even in some conflict-wracked Middle Eastern countries like Syria and Yemen—where weapons are plentiful—converted pistols are still popular because they’re relatively cheap. “There is a demand for concealable weapons and this is a more affordable option in certain places,” King said.

For instance, Small Arms Survey reports that converted pistols have saturated Libya since the collapse of the Muammar Gaddafi regime. The pistols sell for around $125—a fraction of the $1,600 to $4,100 price that real handguns fetch on the black market.

Would-be converters can find blank guns manufactured in any number of countries. But Turkish models, including the Atak Zoraki and Ekol-Voltran, are among the most popular choices.

“Turkey has several different manufacturers and they’re being made at pretty high quality,” King said. “They’re using metals and they’re basing the designs very closely to the actual firearms.”

The weapons are also harder to trace than regular firearms because many lack serial numbers, and even more don’t have rifling in their barrels. The lack of rifling is particularly important, as it denies investigators a source of forensic data which can link a bullet to the gun from which it was fired.

The relative quality of manufacturing and inclusion of metal parts—as opposed to plastic ones—is helpful for converters because it reduces the very real risk that the weapon malfunctions or even explodes.

King notes that, at least in Europe, a varying patchwork of laws governing the possession and conversion of replica, blank-firing and other types of less-than-lethal firearms is a contributor to their availability.

As a result, Europe’s close integration and lack of borders makes buying and selling converted and convertible firearms easier.

But as ever, where there’s demand, supply finds a way. For now at least, these replicas are plentiful and close enough to the real thing for buyers to find what they want.