Cuba Is Letting Citizens Get Mobile Internet On Their Smartphones 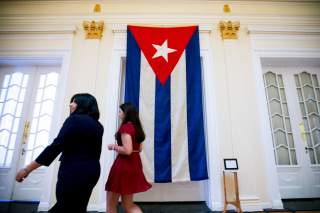 Some Cuban citizens now have mobile internet on their smartphones as the Communist government plans to let the entire country access the worldwide web from their personal devices by the end of 2018.

Cuba is technologically behind most of its Latin American neighbors, even though most Cubans who own cellphones have smartphones, reported Reuters. 3G technology is a new phenomenon to Cubans, while their neighbors are testing much more powerful 5G networks.

Cuban President Miguel Díaz-Canel, who assumed office on April 19, is behind the push for greater connectivity, citing its economic benefits, reported Reuters.

“We need to be able to put the content of the revolution online,” Díaz-Canel said while still vice president in July, claiming that Cubans could “counter the avalanche of pseudo-cultural, banal and vulgar content.”

“It’s been a radical change,”said state journalist Yuris Norido, according to Reuters. “I can now update on the news from wherever I am, including where the news is taking place.”

All 5 million of its cellphone customers will have internet on their smartphone by the end of 2018, ETECSA said. That’s approximately half of the communist country’s population.

ETECSA has been selling mobile data plans to elite customers since December, reported Reuters. Prices were high at $45 a month for four gigabytes of data, reported the Evening Standard.