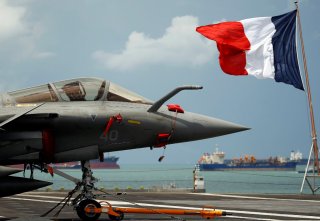 What a difference a year can make. France’s flagship aircraft carrier Charles de Gaulle arrived at the port of Limassol, Cyprus last week as part of the four-month “Clemenceau 21” deployment through the Eastern Mediterranean, Red Sea, Indian Ocean, and Arabian Gulf.

No doubt the crew is happy to be underway, given that in April and May of 2020 the carrier was sidelined after an outbreak of the novel coronavirus.

The nuclear-powered aircraft carrier is the French Navy’s flagship, and it entered service in May 2001, after what was seen as a troubled fifteen-year construction period. Launched in May 1994, it didn’t begin sea trials until January 1999 and was commissioned a year later.

When Charles de Gaulle entered service in 2000, she was among the world’s most advanced warships and the only nuclear-powered carrier outside the United States Navy. However, the French flagship is significantly smaller than its American counterparts. It displaces just 42,000 tons and is similar in size to the U.S. Navy’s Wasp-class amphibious assault ships.

Yet, along with the U.S. Navy’s Nimitz­- and Ford-class carriers it is able to utilize catapults to launch aircraft, which are capable of launching one aircraft a minute. Its flight deck consists of a main runway angled at 8.5 degrees to the ship’s axis, while the aircraft launch area is forward of the island.

Charles de Gaulle can carry up to forty aircraft in its airwing, which includes the Dassault Rafale M, Super Etendard, and E-2C Hawkeye airborne early warning aircraft. The warship can also operate with Dolphin PEDRO, AS 565 Panther, or NH 90 helicopters. It is home to approximately 1,200 sailors and 100 naval officers, including its airwing, as well as some 500 marines.

During last week’s visit to Cyprus, French Ambassador Salina Grenet-Catalano expressed her gratitude to the Cypriot authorities via social media for their continuous service of French naval warships, as well as for the high level of hospitality and cooperation in matters of defense and security.

“Now, more than 70 years later, the spirit of friendship and service lives on in the men and women who work aboard both aircraft carriers,” Robertson added. “Our combined forces provide security and stability but also highlight that we are stronger when we work together to promote a safe maritime environment.”

IKE and the Charles de Gaulle have a long history of operating together, and that included providing air support to Operation Inherent Resolve from the Mediterranean Sea in 2016, and again in 2020 when they conducted maritime operations in the Red Sea.