D-Day Won World War II? Not So Fast—There Was Another Battle 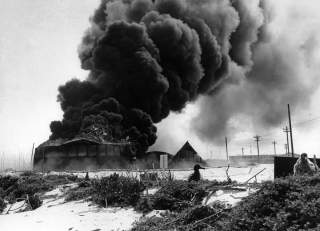 Key Point: The liberation of Europe wouldn't have happened without the battle for Midway.

Thursday, June 6th saw the 75th anniversary of the Allied invasion at Normandy, the amphibious assault phase of Operation Neptune, or what we commonly remember as D-Day.  U.S. troops who landed at Normandy – particularly at Omaha Beach – waded ashore amidst a storm of chaos, a blizzard of machine gun fire, and a hail of plunging mortars.  Despite great confusion and casualties, at the squad level and below, the men at Omaha rallied and pressed forth with tenacity and nerve to breach sand-berms and barricades, neutralize enemy positions, and salvage their sectors.  Losses at Omaha were immense – but American resolve helped establish a foothold on the coast of France – and “the rest,” they say, “is history.