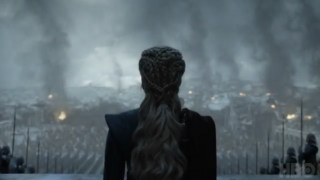 In a shocking 90 minutes of dragon-inflicted carnage, “The Bells” -- the penultimate episode of HBO’s fantasy epic Game of Thrones -- finally settled a question journalists and foreign-policy experts for years have been trying to answer.

In the world that showrunners David Benioff and D.B. Weiss and source-material author George R.R. Martin have created, are dragons metaphors for tactical air power? Or are they nuclear weapons?

Yes, it’s silly to look for practical military lessons in a television fantasy whose creators aren’t even trying realistically to depict the world or warfare. But a T.V. show can explore broader themes in ways are that useful for people in the real world.

Broader themes such as the power of weapons of mass destruction and the consequences of using them.

For that’s what dragons are. Fantasy WMDs.

Daenerys Targaryen, one of several claimants to the throne of Martin’s fictional continent of Westeros and the only one with dragons, first deploys the beasts in combat in the 2017 episode “The Spoils of War.” A dragon flies overhead as Dany’s Dothraki cavalry attack a rival Lannister supply convoy.

The dragon’s fiery breath is terrifying … and decisive. The Lannister forces wither.

“Game of Thrones' dragons are a conventional air force, not a nuclear weapon,” Matthew Gault wrote for Vice. “At best, Dany's secret weapons are the military equivalent of an A-10 Warthog—a heavily-equipped close-air-support fighter plane. She's the only person in this fantasy world with an air force and that gives her an advantage, but no one ever won a war on air power alone.”

In “The Bells,” however, Dany’s sole surviving dragon doesn’t just provide air support for her forces attacking King’s Landing, the last Lannister city and the seat of power in Westeros. At the Targaryen queen’s command, the dragon burns the city and kills not just most of the Lannister troops, but countless innocent civilians, as well.

And in so doing, Dany clearly loses the support of her one civilian advisor and two of her three top generals. Tens of thousands of survivors of the battle know the invading queen for what she is. A murderer and a tyrant. Word of her madness is spreading.

Game of Thrones’ dragons help to reveal the fallacy of the “usable” nuke. Both the United States under Donald Trump and Russia under Vladimir Putin are developing smaller, “tactical” nuclear weapons that both seem to believe they could use without effectively destroying the world as we know it.

But usable nukes are a lie. “The notion that nuclear weapons can be used for anything ‘beyond deterrence’ is reckless and dangerous thinking,” wrote author Will Saetren and Geoff Wilson, a research associate at Ploughshares Fund, a global security foundation.

Usable dragons also are a lie. While it’s true that in Westeros only Dany possesses a dragon, there are other WMDs in Martin’s fictional world, including a powerful incendiary that the Lannisters use to sink attacking ships and incinerate their political rivals.

Dany deploys her scaly weapon of mass destruction seemingly believing that burning one city will end the continent’s war and make possible her peaceful reign.

But it’s clear as King’s Landing and its residents lie in ashes that Dany will not rule Westeros. Not peacefully. Not with anything like the consent of the continent’s people. And now there’s no incentive for any army on the continent not to deploy their most powerful weapons.

Dragons are WMDs. In using them you release forces you cannot control -- and which could destroy everything.