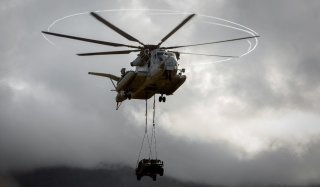 The Defense Advanced Research Projects Agency, the secretive group behind some of the United States' most radical and advanced defense projects, wants to “revolutionize” heavy air life with a large, low-cost seaplane.

More specifically, DARPA wants to “demonstrate a leap in operational logistics capabilities by designing, building, and flying a long-range, low-cost X-plane capable of seaborne strategic and tactical lift. According to a recent media release, the new vehicle concept seeks to expand upon existing cargo aircraft by proving revolutionary heavy airlift abilities from the sea.”

“The envisioned plane will combine fast and flexible strategic lift of very large, heavy loads with the ability to take off/land in water. Its structure will enable both highly controlled flight close to turbulent water surfaces and sustained flight at mid-altitudes. In addition, the plane will be built with a low-cost design and construction philosophy.”

A video released by DARPA along with the media release illustrates what the aircraft could look like. Their ekranoplan is a double-bodied cargo plane that takes advantage of the ground effect, an aviation phenomenon that gives extra lift to aircraft flying at very low altitudes just above the ground or ocean surface.

Though novel, the aircraft would not be the first of its kind. The Soviet Union developed what is probably the most well-known of these kinds of aircraft during the Cold War. Though large and fast, the Soviet foray into ekranoplanes suffered from low maneuverability and could operate only in calm waters.

Interestingly, the aircraft—sporting a blue-gray ocean camouflage scheme—drops off a pair of what appear to be the U.S. Marine Corps Amphibious Combat Vehicles onto an island covered in palm trees, highlighting the aircraft’s applicability to the Indo-Pacific area.

“This first phase of the Liberty Lifter program will define the unique seaplane’s range, payloads, and other parameters,” a program manager in DARPA’s Tactical Technology Office explained. “Innovative advances envisioned by this new DARPA program will showcase an X-plane demonstrator that offers warfighters new capabilities during extended maritime operations.”

DARPA has three crucial challenges to overcome: range, affordability, and maneuverability. First, the ability to operate in maritime environments that aren’t calm will be crucial to the aircraft’s utility. And rather than fielding the perfect, expensive aircraft, DARPA is prioritizing low-cost and light-weight designs. Lastly, the novel heavy-lifters must have the controls necessary to maneuver regardless of sea state or ocean obstacles.

Though not yet in production, DARPA’s ekranoplane heavy-lifter shows promise for bringing mass to far-off fights if the above design particulars can be successfully incorporated.