DARPA Could Soon Be Spying On America's Enemies From Earth's Atmosphere 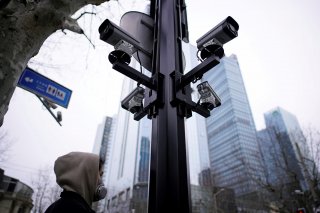 Here's What You Need To Remember: Because DARPA is a military research organization, it’s reasonable to assume that this line of inquiry will have military applications, as well. For example, nuclear weapons tests might also leave fingerprints in the atmosphere. Or bomb explosions, or perhaps artillery firing.

Why does the U.S. military want to turn the Earth’s atmosphere into a sensor?

DARPA, the Pentagon’s pet research agency, says the Atmosphere as a Sensor (AtmoSense) program is meant to detect natural disasters such as hurricanes, earthquakes, and asteroid strikes. But DARPA is a military research organization, which raises the question of what else this research can be used for.

The theory behind AtmoSense is that natural events occur that aren’t detected because there is no continuous global surveillance system to spot them. Nonetheless, the energy of an earthquake leaves telltale signs in the Earth’s atmosphere.

“It’s well known that energy propagates from the Earth’s surface to the ionosphere, but the specifics of how that happens is not currently known enough to use the atmosphere as a sensor,” according to a DARPA press release. “Scientific literature has clearly documented that events like thunderstorms, tornadoes, volcanos, and tsunamis make big ‘three-dimensional wakes; that propagate to the upper reaches of the ionosphere and leave a mark there. Since that energy traverses several other layers of the atmosphere—the troposphere, stratosphere, and mesosphere—on its way up to the ionosphere, the idea is to try and identify the disturbances the “wake” is making along its way to see if researchers can capture information to indicate what type of event caused it.

DARPA is looking to atmospheric scientists to develop ways of measuring changes in the atmosphere, such as pressure, volume, density, and temperature. “Beyond these basic atmospheric variables, the mesosphere and lower ionosphere provide electromagnetic opportunities for measurement due to their charged nature,” the agency added.

DARPA also wants to filter out background “noise” that obscures these atmospheric fingerprints. “When we think about the possible background entropy, there are jet streams, compression of the fluid, shear forces, Coriolis forces, etc.; all those things trigger some sort of turbulence that destroys information,” said C. David Lewis, an Air Force major and DARPA’s AtmoSense program manager. “When it comes to geophysical and meteorological sources of atmospheric disturbance there’s a frequency spectrum emitted from infrasound all the way up to the ultrasound. Some of those frequencies are more immune to atmospheric entropy than others, and those are what we’d like to capture.”

“Maybe I don’t have to directly observe events like an earthquake or tsunami,” Lewis said. “Perhaps I can learn what occurred from information in the atmosphere.”

Yet because DARPA is a military research organization, it’s reasonable to assume that this line of inquiry will have military applications, as well. For example, nuclear weapons tests might also leave fingerprints in the atmosphere. Or bomb explosions, or perhaps artillery firing.

Ironically—and perhaps not coincidentally—civilian scientists are developing methods of tracking tornadoes based on technology developed by the military to detect nuclear weapons explosions. Researchers at the University of Mississippi’s National Center for Physical Acoustics, who helped devise ultra-sensitive microphones to enable the Pentagon to detect illegal nuclear tests, want to see if tornadoes create a distinctive sonic signature that would offer precious minutes of additional early warning time.