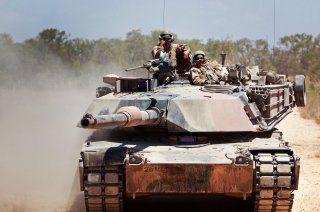 As part of its efforts to be a lighter and faster force that could take a flight across the Pacific Ocean to confront potential threats from the United States Marines Corps will undergo an ambitious 10-year transformation plan that will see the service eliminate its entire tank force, The Wall Street Journal first reported.

Over the course of the next decade, the USMC will ax its tank battalions, as well as its bridging companies and even its law enforcement battalions.

"The Marine Corps is not optimized to meet the demands of the National Defense Strategy," said Major Joshua Benson, spokesman for the Marine Corps Combat Development Command, via a statement first reported by USNI News.

"In the summer of 2019, the Marine Corps began force design activities focused on adapting capabilities to properly shape the Marine Corps' contributions to naval warfare and the joint force," added Benson. "These planning efforts led to a modernized design that incorporates emerging technologies and significant changes in force structure to deliver a Marine Corps the nation needs by 2030."

As part of this ambitious plan, the USMC would also scale back the total number of infantry battalions from 24 to 21, artillery cannon batteries from 21 to five and amphibious vehicle companies from six to four. In addition, the Marines could cut back on the MV-22 Osprey, attack and heavy-lift squadrons – and would even reduce the number of F-35B and F-35C fifth-generation stealth fighters per squadron from 16 to just 10.

As part of the reorganization, the USMC expects to see a reduction of 12,000 personnel across the force over the next decade. This would go beyond the reduction of 2,100 Marines that was called for in the Navy's proposed fiscal 2021 budget.

"I think every service chief would love to have a better force," Marines Corps Commandant General David Berger told the House Armed Services Committee on Feb. 27, as reported by Task & Purpose. "But you need us to be lethal. You need us to be mobile. You need us to be integrated with the Navy. So we're going to reduce the size of the Marine Corps some this year, more next year."

Berger has also called for closer integration between the USMC and the U.S. Navy to address China's buildup in the South China Sea and across the Asia-Pacific.

As part of the efforts to be a more nimble force that is up to 21st-century global threats the Corps will increase its rocket artillery capacity by 300% and add anti-ship missiles to its arsenal. The number of UAS (unmanned aerial systems) squadrons including lethal air and ground systems would be doubled, which would enhance the Corps' ability to sense and strike.

This reorganization would see the end of the USMC 1st Tank Battalion, which was activated on November 1, 1941, at Camp Lejeune, North Carolina and attached to the 1st Marine Division. Tanks from Companies A and B took part in the landings at Guadalcanal in August 1942 and had their first major encounter with the enemy on August 21.