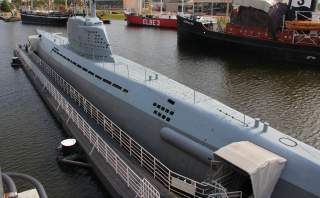 Ten minutes later, Wright unleashed a pattern of five Mark 24 depth charges that injured three German sailors. Then he swiveled around and launched an acoustic homing torpedo. This missed, as it wasn’t designed to attack surfaced submarines. The U-boat was now trailing an oil slick behind it.

Wright harried U-966 for an entire hour until 1:05 P.M., when he was joined by the VB-110 Liberator flown by Lt. W. Parish, who unleashed all six charges 100 feet parallel to the submarine’s starboard side, nearly pitching it over on the port side.

At some point, one of the depth charges actually struck U-966 and got stuck in its hull vents without exploding.

Wolf aggressively maneuvered the submarine to frustrate the bomber’s aim. The flak gunners stitched the skies with more than 12,000 20- and 37-millimeter shells, until one of the twin 20-millimeter cannons overheated and exploded, mortally injuring a gunner.

U-966 had closed the distance to just a few hundred meters at 1:45 P.M. when a final Liberator fell upon it as it limped at 10 knots among Spanish fishing boats off the Ria Ortigueira estuary. First Sgt. Ottokar Žanta from 311 Squadron, the only Czech bomber unit in the RAF, decided not to use his six depth charges for fear of hitting the Spanish boats.

Luckily, he had a back-up armament — braces of four RP-3 armor-piercing 60-pound rockets under each wing.

While Parrish’s B-24 provided covering fire, Zanta’s Liberator made two rocket runs. Though three of his rockets misfired, four of the 3-inch diameter rockets struck the water and curved upward into the U-boat’s hull, rupturing several compartments and the ballast tanks. U-966’s speed fell to just two knots.

Zanta made several more strafing runs then headed for home at 3:10 P.M., completing a nearly 12-hour-patrol.

Wolf’s crippled U-boat was on its last legs after nine hours of constant air attack. Suddenly, its crew spotted what they believed was a British corvette in the distance. Wolf had had enough — he ordered that the top secret documents be burned, told the crew to assemble on the deck to abandon ship and instructed his engineer to set a scuttling charge on a five-minute timer.

In fact, Wolf had spotted the Spanish coast guard vessel Ardia, which had been monitoring the engagement from afar. The case of mistaken identity almost immediately proved irrelevant as the submarine was suddenly “thrown upwards as if by an invisible fist.” It had run aground on the craggy rocks of the Estaca de Bares peninsula near Punta Maeda.

Unfortunately, the turbulent waters swept away the inflatable life rafts before they could be secured. The submariners were forced to swim for their lives to the shore up to 300 meters away. Meanwhile, the engineer opened U-966’s flood valves and Wolf and three companions jumped overboard.

Only a handful made it to shore. Most of the rest, battling against the violent surf and struggling to support wounded comrades, clung on to the razor sharp rocks poking through the surf. Behind them they heard their submarine explode — though whether this was due to the scuttling charge or the pressure-sensitive depth charge lodged in the stern is uncertain.

There was a tragic final act to the day’s violent events. The struggling submariners spotted a portly white seaplane approaching them from above. This was a four-engine RAF Short Sunderland III piloted by Flight Officer Arthur Franklin of 228 Squadron. The Sunderland was also a capable sub-hunter. But when Franklin spotted the Wolf’s floundering crew, he tossed a life raft to them.

At that moment, a flight of three Ju-88R-2s from II/ZG.1 based in Bordeaux pounced upon the ungainly seaplane. Led by Lt. Albrecht Bellstedt, the twin-engine fighter-bombers raked the Sunderland with their three nose-mounted 20-millimeter cannons and machine guns.

Franklin sent out one final radio message before his flying boat’s port wing caught fire. The Sunderland split in two and smashed into the water, the wreck belching fire and smoke.

All were housed in local hotels, save for three heavily wounded sailors. Out of U-966’s 50 crew, three had perished on board the submarine and five drowned while swimming for shore. All 12 men aboard Franklin’s Sunderland were killed.

Many sources claim in error that a smaller American-built Catalina float plane was shot down on Oct. 10. In fact, prior to the Sunderland’s arrival, a Catalina IB from the Coastal Command’s 202 squadron was active in the area, photographing the recovery of the German sailors. However, it returned to base. Records do not attest to any Catalinas being shot down in the area.

The fishermen recovered the bodies of six of the Sunderland’s crew and all five of the drowned submariners. They were first interred locally, then re-buried in German and British military cemeteries in Cáceres and Bilbao, respectively.

The Spanish authorities were in an awkward position. Though General Franco leaned towards the Fascists who helped him seize power during the Spanish Civil War, it was clear the Allies were winning the war and it was important to maintain the appearance of neutrality.

Spanish judges determined that the crew counted as combatants, not castaways, leading to their internment at La Graña naval base with the crew of U-760, which had been interned at Vigo after fleeing Allied patrol planes.

That December, after a BBC radio broadcast mentioned just 30 of the 42 survivors, 10 of the unnamed men were secretly smuggled to France. Then in November 1944, Eckehard was hospitalized in Madrid, reportedly suffering from a lung condition that proved fatal.

In reality, he was smuggled back to Germany with false papers bearing the name “Erich Weber.” Eckehard was promoted to captain and assumed command of a company of marine infantry defending Hamburg.

Shipwrecking in Spain was probably the best thing that could have happened to U-966’s crew. Afforded both their regular pay and a 240 peseta monthly stipend form the German consulate, the internees were allowed unsupervised free time in the city of Ferrol, where wine was only two pesetas a bottle and fine cognac was six.

By contrast, at least four of the repatriated German submariners again saw action. Only one survived.

U-966’s conning tower could be seen protruding from the water at low tide for many years, though the wreck was scrapped in 1960s and eventually lost. Meanwhile, the crew of U-966 felt such a connection to the site of their ordeal that they began holding regular reunions there in the 1970s, and Eckehard’s son even married a local girl.

When the submarine commander passed away in 1978, his ashes were cast into the water of Punta Maeda near the grave of his only command.

Historian Juan Carlos Salgado documented an equally important aspect of this tale. The fate of the Allied pilots who hunted down U-966.

Six weeks later on Feb. 14, 1944, Wright shot down a Ju-88 in a dogfight over the Bay of Biscay, but was then forced to ditch his Liberator due to battle damage. His gunner and radio operator didn’t make it out in time, and another crewman died from his wounds before the survivors were rescued by a RAF seaplane the next day.

A month later on the evening of March 12, Zanta departed on a mission in his Liberator with seven crew. They were never heard from again.

Harmon survived the war. His airplane passed to another crew, which disappeared over the Bay of Biscay late in February 1944. Wellington pilot Gunn also survived.

This history drew from the following sources: Lobos Acosados by José Antonio Tojo Ramallo; U-966 “Gut Holz” by Juan Carlos Salgado; after-action reports on Uboatarchive.net; Riders in the Sky 1944: The Liberator GR Mk.III and GR Mk.V in RAF Coastal Command Service by Pavel Turk and Pavel Vancata; “The U-966 Story: Agains All Odds” by Buck Cummings and Search, Find and Kill by Norman Franks.

This article by Sebastian Roblin originally appeared at War is Boring in 2018.