Death Match: The Navy's Littoral Combat Ship vs. the 'Swarm' (Who Wins?) 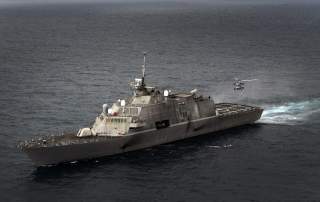 The Navy plans to launch two small boat attack craft raids against its Littoral Combat Ship to prepare the ship for major warfare by testing a new suite of integrated weapons systems and sensors - including missiles, guns, drones and inflatable boats.

The Missile Module is comprised of 24 ship-fired Longbow Hellfire Missiles, 30-and-57mm guns, 11-meter rigid hull inflatable boats, helicopters and vertical-take-off-and-landing ship-launched drones. Ship launched Hellfires, for instance, can utilize all-weather millimeter wave radar, inertial guidance or semi-active laser targeting to fire upon enemy ships, helicopters, fixed-wing assets or drones attacking the LCS. The concept with the overall module is to enable each platform to function as a “node” on a larger network.

Forward-operating drones, for instance, can send real-time images to helicopters and ship-based fire control radar, enabling faster response time. Armed helicopters can more quickly find and attack targets, if they are identified and transmitted from other assets such as drones, submarines or ship-based sensors. By extension, all of these systems could cue deck-mounted small arms for the closer in threats, such as 30mm and 57mm guns. These warfare tactics, mirrored by larger platforms such as Carrier Strike Groups, is to create an integrated, layered defense system designed to provide defenses at different ranges and against a wide sphere of potential attack systems.

Small, fast-transport 11-meter inflatable boats are also regarded as an indispensable element of the Surface Warfare Mission Packages the Missile Module is engineered to support. Often used as rapid entry or small attack vehicles for Navy SEALs and other Special Operations Forces, these boats can provide ship crews with an ability to leave the ship and “engage” approaching small-boat attackers, providing yet another element of defense.

Swarming small boat attacks are regarded as extremely serious combat concerns for Navy war-planners, who operate with a decided recognition that this kind of threat is quite substantial when it comes to both counterterrorism and major warfare on the open ocean. The strategy with small boat attacks against larger platforms is multi-faceted; multiple, fast-moving points of small missile and gunfire attack are naturally much more difficult to recognize and target. The intention with these tactics is to overwhelm, confuse or simply outnumber ship-defense weapons systems such as sensors, interceptors and deck-mounted guns.

This phenomenon can be explained in terms of what’s called “dis-aggregated” operations, if on a smaller scale than is typically thought of. Not only are a more dispersed group of small boats more difficult to target, but emerging networking technology can enable them to coordinate, share target information and stage integrated missions while farther away from one another. Navy and Marine Corps strategists, now planning for future amphibious warfare, are employing these concepts regarding ship-to-shore amphibious attacks. Dis-aggregated, yet closely networked attack nodes provide attacking commanders with a wider range of options and increase possibilities to defend against incoming shore attacks by avoiding a more condensed or linear ocean assault.

The proliferation of longer-range mobile guns, to include possible emergence of lasers, electronic warfare or boat-launched drone attacks, all make the prospect of facing swarms of armed, fast-moving small boats even more dangerous for surface ships. Furthermore, there is no reason small boats with manned crews could not carry and fire portable land weapons such as RPGs, Anti-Tank Guided Missiles aimed at ship structures or hand-launched attack drones filled with explosives.

Pentagon threat assessment analysts have long expressed concern that small boat attacks could, for instance, be used by Iranian forces to stop the flow of naval traffic through the dangerous and narrow Strait of Hormuz - the only passage from the Persian Gulf into the open ocean. Concurrently, small attack craft could just as easily be launched on the open ocean by host ships launching offensive operations from safer distances. Not only could the boats perform sensing and reconnaissance missions, but they could of course also themselves become explosives or seek to jam a ship’s radar by flooding it with dispersed attack nodes.

These are the reasons the Navy is moving quickly to prepare its ship-based offensive and defensive weapons from these kinds of very serious threats. The formal test and evaluation phase is slated to finish up by early next year, as a key step toward operational status.

The new TDMM completed two days of at-sea testing several months ago in order to prepare for operational service on LCS ships. The technology uses an underwater acoustic projector, attached to a cable dropped from the ship’s stern to identify acoustic homing and wire-guided enemy torpedoes, service information describes.

The digitally-controlled system, traveling underwater beneath the ship, uses acoustic technology. In a manner quite similar to radar above the ground, the return signal, or ping, is then analyzed to determine the distance, shape and speed of an approaching enemy threat. In the case of the Navy, the “ping” is of course acoustic sound waves and not the electronic pings known to surface radar.

"The torpedo defense capability the TDMM provides is envisioned for eventual deployment on all LCS ships, and potentially other small combatants," a Navy statement from earlier this year said.

While the ship was conceived and developed as a multi-mission countermine anti-submarine surface warfare platform for littoral operations, the Navy is trying to move quickly to further arm the ship for major maritime combat as well.

For instance, as an LCS approaches shallow waters, it may operate in a more autonomous, or disaggregated fashion and, therefore, be unable to rely upon combat protections from nearby larger ships.

Accordingly, equipping the ship with improved defenses, would better enable the platform to defend itself while operating more independently. This brings the added advantage of reducing risk for other surface combatants, in part because the LCS is designed for high-risk countermine missions in littoral areas, allowing larger ships can remain at safer distances without being exposed to mines.

The previously published Navy’s Distributed Maritime Operations Concept builds upon the Navy’s much-discussed “distributed lethality” strategy. This strategic approach, in development for several years now, emphasizes the need to more fully arm the fleet with offensive and defensive weapons and disperse forces as needed to respond to fast-emerging near-peer threats.

Part of the rationale is to move back toward open or “blue water” combat capability against near peer competitors emphasized during the Cold War. While the strategic and tactical capability never disappeared, it was emphasized less during the last 10-plus years of ground wars wherein the Navy focused on counter-terrorism, counter-piracy and things like Visit Board Search and Seizure. These missions are, of course, still important, however the Navy seeks to substantially increases its offensive “lethality” in order to deter or be effective against emerging high-tech adversaries.

Osborn previously served at the Pentagon as a Highly Qualified Expert with the Office of the Assistant Secretary of the Army - Acquisition, Logistics& Technology. Osborn has also worked as an anchor and on-air military specialist at national TV networks. He has a Masters in Comparative Literature from Columbia University.