Death Valley Hits 128 Degrees. Is This the Beginning of the End? 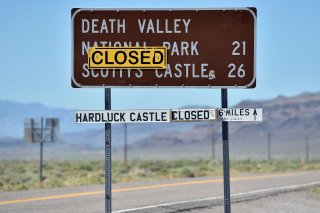 The official weather station in Death Valley, California, registered a temperature reading of 128 degrees Fahrenheit this past weekend—the highest recorded temperature on the planet since 2017.

That temperature reading, however, is disputed within the meteorological community. As a result, most weather experts conclude that the “real” hottest temperature ever recorded was 129.2 degrees Fahrenheit in 2013, which was also in Death Valley.

The heat at Death Valley on Sunday was so extreme that there were reports of several vehicles breaking down.

“Yesterday’s excessive heat caused at least three vehicles in the park to break down from overheated engines, which can quickly turn fatal if passengers are stranded in this climate without air conditioning,” Death Valley National Park officials posted on Facebook.

“Fortunately, rangers were available to respond and no major medical incidents were reported.”

While such heat waves can be common during summers, climate experts, however, are warning that these sky-high temperature readings are quickly becoming the norm due to man-made climate change.

If temperature data from recent months are any indication, it’s indeed becoming increasingly likely that 2020 will be the hottest year globally since records have been kept, which date back to the late 1800s. Moreover, the world’s five warmest years on record have all occurred since 2015.

One of the few places that was cooler than average in recent months was much of Canada and the eastern United States, according to NOAA.

That, however, is doing little to slow down the rise of 2020’s overall temperatures.

Both NASA and Berkeley Earth have 2020 ranked as the second warmest on record, a notch below 2016. That year witnessed the Super El Niño, in which the tropical Pacific Ocean releases large amounts of heat into the atmosphere, boosting the chances of future record-breaking warm years.

Furthermore, scientists pointed out that we are currently at the bottom of the eleven-year solar minimum, when the incoming energy from the sun is reduced.