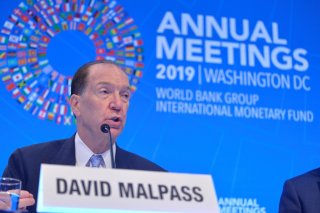 The leaders of the International Monetary Fund (IMF) and World Bank cautioned on Wednesday that global interest rate increases had saddled most of the world’s developing economies with significant debt burdens, even as many continue to struggle to respond to the COVID-19 pandemic and the rise in global food prices caused by Russia’s invasion of Ukraine.

World Bank president David Malpass noted in a press conference that the developing world had undertaken “a huge buildup of debt” since the start of the pandemic, “especially in the poorest countries.”

“As interest rates rise, the debt pressures are mounting on developing countries, and we need to move urgently towards solutions,” Malpass said. He noted that debt restructuring for developing countries had been a topic of discussion at the World Bank and the IMF throughout the spring.

The president also noted that the organization had dealt with the fallout from the Russo-Ukrainian War, the lingering effects of the pandemic, and a global economic slowdown caused by a variety of causes.

Also on Wednesday, Kristalina Georgieva, the IMF’s managing director, warned that around 60 percent of low-income countries had entered a condition of “debt distress,” meaning that the countries’ debt-to-GDP ratio had crossed 50 percent. Under these conditions, countries are presented with an impossible choice: use incoming funds to service debt payments, leading to suffering among their poorest citizens, or continue to fund welfare and aid programs, resulting in steadily growing debt. Most countries have chosen the former approach, and the IMF has estimated that the global debt-to-GDP ratio of the world’s low-income countries as a whole would cross 50 percent in 2022, up from 44 percent in 2019.

The leaders of many developing economies borrowed heavily from the IMF and the World Bank at the onset of the pandemic, seeking to use loans to shield their economies from the negative economic impacts of lockdowns and work stoppages. The two international banks’ largesse helped to propel a fast economic recovery after the worst days of the pandemic in 2020, but the ease of credit and the vast quantity of economic assistance led to inflation and rising prices. This, in turn, spurred most of the world’s central banks, led by the U.S. Federal Reserve, to increase interest rates, which make debt payments by developing countries harder to service.

Georgieva did not explicitly condemn the strategy of raising interest rates, but urged bankers to be “mindful of the spillover risks to vulnerable emerging and developing economies.”

Marcello Estevao, the World Bank’s global macroeconomic director, wrote in March that as many as a dozen developing countries could default on their debts by the end of 2022 without outside assistance. At least one country, Sri Lanka, has already done so; the government in Colombo announced in mid-April that it would be unable to meet its foreign debt obligations and was seeking a loan restructuring program from the IMF.