Decision Time: Will This Be the Army’s Next Generation Squad Weapon? 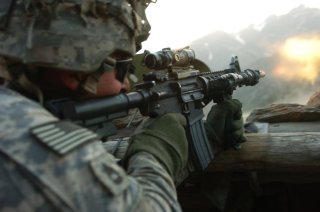 The U.S. Army is nearing the final stretch of a much-anticipated decision regarding which model to select for its Next Generation Squad Weapon (NGSW), a new rifle now in development that is slated to replace the existing M4 Carbine and M249 Squad Automatic Weapon.

The competitors are Sig Sauer and a submission from a Beretta USA-LoneStar Weapons Systems team.

As the Army ultimately makes its selection, much of the thinking is likely to center upon the potential combat reliability of any new weapons system, something which could offer an advantage to Beretta due to its long history of producing the Army’s M9 pistol for thirty years. The rifle itself will need to offer breakthrough technologies in the areas of accuracy, range, and, of course, lethality, yet a lesser recognized yet equally significant aspect of the weapon relates to its ammunition.

A key feature of the emerging NGSW is that it will fire a new 6.8mm round designed to be much more lethal, explosive, and longer range than the current 5.56mm round. An interesting essay on the weapon by Army Maj. Matt Dirisio makes the point that the Russian invasion of Ukraine highlights the limitations of the existing 5.56mm round.

Dirisio explains that ammunition improvements should not in any way “add weight” to the new weapon, writing “The average soldier already carries over 100 pounds, with loads of up to 200 pounds sometimes occurring on recent deployments in Afghanistan. A lighter cartridge could significantly reduce this burden, and here the 30% lighter True Velocity ammunition in the Beretta USA-LSWS may offer an advantage.” Dirisio also points out attributes and functions of Sig Sauer’s offering and makes a clear point not to favor either of the two offerings or make any specific comments about the ongoing competition.

True Velocity’s advanced composite-cased 6.8TVCM ammunition solution complements the LoneStar weapon by providing extremely consistent muzzle velocity, improved accuracy, and extended effective range in a cartridge that is approximately 30 percent lighter than a brass-cased 7.62x51mm cartridge. The polymer-based material employed in the design of the True Velocity case also insulates the weapon from heat transfer, reducing wear and tear on the rifle.

The NGSW weapons and rounds are slated to be deployed by the end of 2022, going first to soldiers within the close combat force, including elements of the Active National Guard and Reserve.