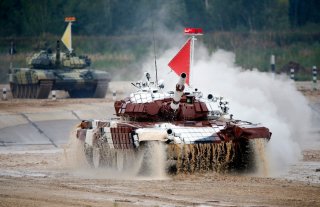 “According to the annual China-Russia military cooperation plan and consensus reached by the two sides, the Chinese People’s Liberation Army will send some troops to Russia to take part in the Vostok (East)-2022 strategic exercise,” reported China Military, the official publication of the Chinese People’s Liberation Army (PLA). “The Chinese military's participation in the exercise is unrelated to the current international and regional situation, but designed to deepen practical and friendly cooperation with the militaries of participating countries, enhance the level of strategic coordination and strengthen the ability to cope with various security threats,” the report added.

Vostok—Russian for “east”—is the latest in a rotating cycle of quadrennial Russian drills, preceded by Zapad (“west”) 2021, Kavkaz (“Caucasus”) 2020, and Tsentr (“center”) 2019. These exercises are used to evaluate the battle readiness of Russia’s four corresponding Military Districts: Eastern, Western, Southern, and Central, respectively.

The Vostok 2022 exercises, which will be held from August 30 to September 5, will draw participation from countries including India, Mongolia, Belarus, and Tajikistan. The complete list of foreign participants at Vostok 2022 has not been revealed, nor have Russian officials elaborated on the scope of their participation. The drills will be held across thirteen Eastern Military District training grounds and involve units from Russia's airborne forces and long-range aviation, according to Russian news outlet RIA Novosti. It is unclear how many Russian troops and precisely what types of equipment will take part in the drills. The Eastern Military District is headquartered in the far eastern city of Khabarovsk, less than twenty miles from the Russia-China border.

Moscow and Beijing have taken steps to deepen their military, political, and economic ties in the aftermath of Russia’s invasion of Ukraine. Washington imposed penalties against Chinese companies for allegedly supporting Russia’s defense industry in June. Though the White House does not believe Beijing to be “systematically” aiding Russia’s war effort, China’s booming trade relations with Russia have been vital to shoring up Russia’s beleaguered economy as the Kremlin works to sustain its combat operations in Ukraine six months into the war.

Russian president Vladimir Putin reaffirmed earlier this week at the ARMY-2022 expo in the Moscow region that Russia is interested in continuing to conduct joint drills with foreign states. “As before, we invite our allies and partners to take part in joint command and staff and other types of exercises. Such training, the development of complex training and combat missions, is important for improving military skills and the quality of military command and control, as well as for tactics and the coherence of units and formations,” he said.