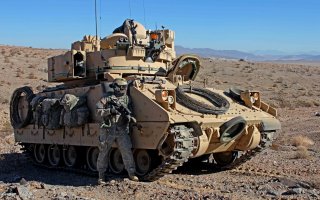 The Army intends for its Bradley replacement Optionally Manned Fighting Vehicle to be robotic, successful in transporting infantry into hostile enemy fire, survivable against armored attacks and, perhaps most importantly, extremely lethal.

Part of this sought-after lethality pertains to a rapid push to decrease sensor to shooter time by integrating advanced sensors, fire control, precision weapons and artificial-intelligence-enabled computing. Defense industry competitors are now offering their best options to the Army, hoping to be chosen to enter the next phase of production contracts wherein prototypes are built and the new vehicle takes several key steps toward ultimate deployment.

One industry team, now building an American variant of the “Lynx” armored infantry vehicle, is led by German combat vehicle manufacturer Rheinmetall defense and supported by Raytheon, Textron Systems, L3 Harris and Allison Transmission. The defense contractor group is to build a U.S. variant of the Lynx specifically tailored to meet U.S. Army requirements and be built in the United States. For example, American Rheinmetall Vehicles is exploring further expansion in the United States, and plans to build its new Lynx OMFV at a Textron Systems armored vehicle facility in the United States, should it be chosen.

For example, Raytheon has been involved with the Lynx project for many years now and operates numerous U.S. sites, including, technology development and manufacturing facilities. Specific to its involvement with the Lynx, Raytheon is drawing upon its targeting, sensing, artificial intelligence and advanced weapons technologies.

“We’re able to leverage our extensive experience with integrating complex mission systems onto platforms, the full sensor to shooter capability, that can help to inform requirements, influence the design, and ultimately shape what will be a next-generation, leap-ahead system for the warfighter,” Brad Barnard, Raytheon’s senior director of Area Defense Systems for the Optionally Manned Fighting Vehicle, told the National Interest.

Raytheon also does a lot of digital engineering with its emerging weapons systems, which is an approach that will support the ongoing maturation and adaptation of combat requirements.

“We can help provide the critical tools and analysis that will support the Army’s desire for requirements refinement and rapid, iterative concept development,” Barnard said.

All members of the team talk about a major ongoing developmental focus for the vehicle, which includes the use of computer simulations and digital engineering, a fast-emerging method of assessing different design models, testing weapons and sensor performance and, perhaps most of all, ensuring continued upgradeability through the use of open technical standards. The idea is to allow for software and hardware upgrades to mission systems such as sensors, processors or fire control systems as new threats arrive. L3 Harris is, not surprisingly, a major contributor to this process.

“As the vehicle evolves, digital engineering will focus upon the impacts that the potential

upgrades can have upon mission effectiveness and warfighter safety. A full digital thread allows for that,” Hugh McFadden, the director of strategy and product development for L3Harris, said.

L3Harris has long been a leader in command and control, an area of technological focus likely to incorporate L3Harris’s historic participation in numerous software programmable radio developmental programs. Given the crucial role communications will likely play in a vehicle such as OMFV—especially with sensing and manned-unmanned teaming—hardened, secure and technologically advanced radio-frequency technologies will certainly figure prominently. This is particularly true in the case of software-defined radio, as it can transmit IP packets of voice, video and data across a meshed network of forces without necessarily needing to rely upon a fixed infrastructure.

“The ability to leverage all of that data during the development lifecycle can let us come back in and optimize its utilization and improve performance in the field,” Paul Embry, a senior scientist of project engineering for L3Harris, told the National Interest. “That performance could be in the form of availability, or actual attributes of the system and what it does. And ultimately can also allow us to work through what I would call adaptability, which is defined quick and Innovative ways to extend the capability of the platform once it is deployed.”