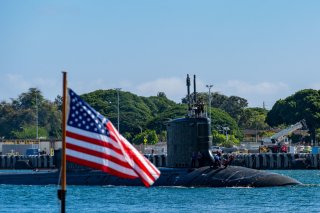 Hicks seemed to capture the U.S. military’s long-standing mission ethic of backing the commander in chief, regardless of party.

She told the audience that “just walking through the halls here today really reinforces” the focus that Reagan had on supporting democracy. Hicks added that “President Biden shares those core convictions about the importance of protecting our democracy, which today faces a myriad of challenges.”

These comments were likely welcomed with enthusiasm by the audience, particularly in light of the political polarization in America. However, as Hicks noted, Democrats and Republicans can put those differences aside to stand together against the many challenges and threats facing America.

Alongside a clear and understandable emphasis on the humanitarian and security concerns caused by Russia’s ongoing assault on Ukraine, Hicks was clear that the threat of China is by no means dropping below the radar.  Instead, Beijing remains “our military’s most-consequential strategic competitor and pacing challenge.”

Hicks again invoked the spirit of Reagan’s well-known Cold War deterrence posture to explain how the Pentagon’s budget is closely aligned with the current threat environment.

“In an address to the American people in 1983, President Reagan spoke about his defense budget request in this way: Budget is much more than a long list of numbers, for behind all the numbers lies America’s ability to prevent the greatest of human tragedies and preserve our free way of life in a sometimes-dangerous world,” Hicks said.

As part of her presentation, Hicks outlined broad parameters associated with the concepts woven into the National Defense Strategy, while of course not forgetting individual threats like China and Iran. She also highlighted the importance of “building a resilient Joint Force defense ecosystem.”

Her comments about supporting the development of a networked, multi-domain joint attack concept align closely with her recent announcement about the Pentagon’s implementation plan for Joint All Domain Command and Control, or JADC2. JADC2, a Pentagon-wide program, is now breaking through with efforts to align and integrate service-specific networking technologies into a joint, multi-service, multi-domain attack posture.