Delta IV: Russia Retired One of the Most Powerful Nuclear Submarines Ever 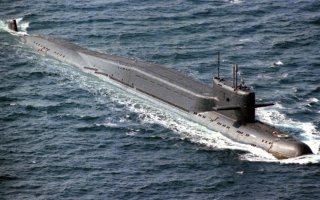 Last April, the Russian Navy announced that it will decommission the Project 667BDRM 'Delfin' (NATO reporting name: Delta IV) strategic nuclear-powered ballistic missile submarine Yekaterinburg (also known as Ekaterinburg) next year. The submarine, which entered service with the Northern Fleet thirty-six years ago, will be withdrawn from service.

"In 2022, the Yekaterinburg will be withdrawn from the Northern Fleet’s combat structure and sent for disposal," a source in the domestic defense industry told TASS on Wednesday.

TASS had no official confirmation of this information.

The Project 667BDRM 'Delfin' strategic nuclear-powered missile-carrying strategic submarine was laid down at the Sevmash Shipyard, currently part of the United Shipbuilding Corporation, in 1982. She was floated out in 1984 and accepted for service two years later.

Yekaterinburg was an updated version of the original Project 667B 'Murena" class of submarines that were designed and built in the Soviet Union beginning in the early 1970s. Built at the same times as the Typhoon-class, the Delta-class submarines have formed the backbone of the Soviet and Russian strategic submarine fleet since first being introduced in 1973.

While an aging platform, the Delta IV boats remain quite capable and are armed with 16 R-29RMU Sineva liquid-fuel ballistic missiles, which each can carry between four and eight warheads. Unlike previous versions of the Project 667 design, the Delta IV is able to fire missiles in any direction from a constant course in a circular sector. It is also able to fire its ballistic missiles from a depth of 55 meters while cruising at a speed of six to seven knots.

A total of seven Delta IV submarines were produced between 1981 and 1992. The submarines have an operational diving depth of 320 meters (roughly 1,050 feet) and a maximum depth of 400 meters (1,300 feet). The nuclear-powered boats have a maximum speed of 24 knots submerged.

Yekaterinburg was awarded the Russian Navy Commander's Prize for her missile launches in 2005, and a year later successfully fired missiles at the Chizha test range from the North Pole. The strategic sub has also accomplished combat training and test launches of intercontinental ballistic missiles (ICBMs), including Sineva and Lainer ICBMs.

On December 29, 2011, the submarine caught fire while undergoing a refit at a floating dry dock in Murmansk. It likely began when sparks from welding of the boat's hull ignited wooden scaffolding around the submarine, which then spread to the flammable rubber coating that covers the hull. The submarine was reported not to have been carrying any weapons at the time of the fire, and there were no reported injuries or radiation leak. Damage from the fire exceeded a billion rubles.

After three-year repairs, Yekaterinburg rejoined the Fleet and her service life was extended by five years. Last year her weapons were removed in preparation for decommissioning.