Dem. Rep. Al Green: We Can Impeach Trump 'More Than Once' 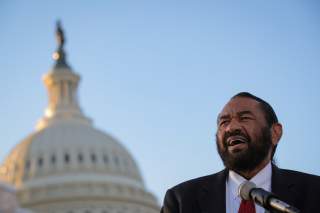 Green said in a C-SPAN interview that a “president can be impeached more than once” and that there is “no limit” to the number of times the House can vote on impeachment.

Green first introduced articles of impeachment in November 2017, less than 10 months after Trump was sworn into office.

“My hope is we will expand this and take up additional issues. I would also say this for your viewers, for edification purposes — a president can be impeached more than once. So we can do this — we can move forward with what we have on the table currently. We can take this before the Senate, and we can still investigate other issues, and when the president has committed additional offenses — and my suspicion is that he will — we can take those before the Senate,” he continued.

“There is no limit on the number of the times the Senate can vote to convict or not [convict] a president. No limit to the number of times a House can vote to impeach, or not, a president. So my belief is that the speaker will probably say we are going to move forward with what we have now, but we are not going to end investigations and that there may be a possible opportunity to do other things at a later time.”