A Democratic President Could Rejoin the Iran Nuclear Deal 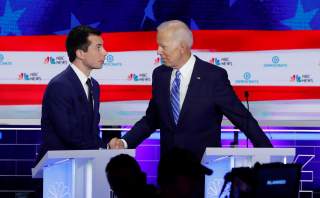 As tensions escalate in the Persian Gulf, U.S. presidential candidates from the Democratic Party are staking out positions on the 2015 deal whereby Iran limited its nuclear program in exchange for sanctions-relief.

U.S. president Donald Trump, who is running for reelection in 2020 against a large slate of Democrats, in 2018 withdrew the United States from the Joint Comprehensive Plan of Action nuclear deal, a signature accomplishment of former U.S. president Barack Obama.

While there are some caveats, several of the major Democratic candidates told the Council on Foreign Relations their administrations would rejoin the JCPAO. Other candidates apparently declined to answer CFR’s queries on the subject.

“Abandoning the Iran nuclear deal was reckless and dangerous,” New York senator Kirsten Gillibrand said. “We need to rejoin our allies in returning to the agreement, provided Iran agrees to comply with the agreement and take steps to reverse its breaches, and strengthen the deal.”

“While President Trump’s reckless policies have moved American security and the security of allies backwards, I would -- together with our allies -- press Iran to extend the agreement for a longer period, and tackle other security issues from Iran’s missile program to its support for terrorists,” Gillibrand added. “I believe that our leverage will increase if Iran sees the benefit of agreeing to a deal.”

The European Union, China, Russia, France, the United Kingdom, Germany -- the balance of the so-called “P5+1” -- and Iran remain parties to the deal. As recently as June 2019 Iran had abided by all the deal’s limits on centrifuges, heavy water and enriched fissible materials. More recently, Tehran has warned that it would exceed the JCPOA’s caps.

But instability resulting from the deal’s fraying in the summer of 2019 fueled repeated violent clashes. Iran shot down a U.S. Navy drone. U.S. forces shot down Iranian drones. British troops seized an Iranian tanker that London suspected of illegally shipping oil to Syria. Iranian troops in turn seized a tanker with U.K. ties. Some tankers have been damaged in suspected Iranian bomb attacks.

“It was a serious mistake for President Trump to withdraw from the Iran nuclear deal, and I never would have done it,” New Jersey senator Cory Booker told CFR. “The JCPOA brought transparency into Iran’s nuclear program and pushed back a nuclear breakout by at least 10 years. Without an agreement, Iran is now able to rapidly enrich uranium and drastically reduce the time it would take for them to produce a nuclear weapon.”

But “we must take stock of facts on the ground,” Booker added, “including Iran’s recent breach of its enrichment limit, and negotiate an updated agreement to stop the threat posed by Iran’s nuclear program.”

“We should have no illusions about the reality that Iran poses challenges to U.S. interests beyond its nuclear program: its ballistic missile program, malign behavior in the region, threats to our ally Israel and human rights abuses,” Pete Buttigieg, the mayor of South Bend, Indiana, told CFR.

“But having the JCPOA in place created a foundation from which we could begin addressing those concerns, all of which will be even more intractable if we lack a mechanism to verifiably and permanently prevent Iran from acquiring a nuclear weapon.”

“If Iran resumes implementing its commitments, then I would rejoin,” Buttigieg added. “But I would take the agreement as a floor, not a ceiling. I would revive P5+1 diplomacy and direct U.S.-Iran dialogue at the appropriate levels and would want to pursue follow-on agreements that extend the timeframe of certain nuclear restrictions, cover Iran’s missile program and address its role in regional conflicts, all in return for targeted sanctions relief.”

“I would re-enter the agreement on day one of my presidency and then work with the P5+1 and Iran to build upon it with additional measures to further block any path to a nuclear weapon, restrain Iran’s offensive actions in the region and forge a new strategic balance in the Middle East,” Vermont senator Bernie Sanders pledged.