Democrats Will Use Coronavirus To Get What They Wanted All Along 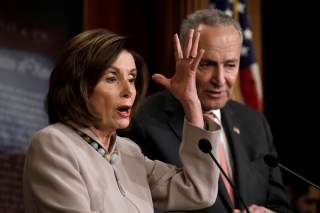 Rahm Emanuel, then chief of staff to President-elect Obama, famously said in late 2008 “You never want a serious crisis to go to waste. And what I mean by that [is] it’s an opportunity to do things that you think you could not do before.” Dubbed “Rahm’s rule,” the same principle may be informing some policy responses to the coronavirus.

Indeed, House Speaker Nancy Pelosi and Senate Minority Leader Chuck Schumer are packagingsignificant chunks of their longstanding legislative agenda under the guise of responding to the coronavirus: “In light of reports that the Trump administration is considering new tax cuts for major corporations impacted by the coronavirus, we are demanding that the administration prioritize the health and safety of American workers and their families over corporate interests.”

The demands include creating a new federal paid leave program, nominally limited to “workers impacted by quarantine orders or responsible for caring for children impacted by school closures.” Democrats are unlikely to stop there in the long run, as leading Democrats have called for the creation of a broad federal paid sick leave program since 2004. Still, in the short run a targeted approach could find common ground with the White House, whose similarly targeted plan “may be implemented through executive action.”

Democrats’ demands also include longstanding calls to expand food stamp benefits, as well as to provide “enhanced” unemployment insurance (UI) benefits. States typically set the amount and duration of standard weekly UI checks. Most states currently pay up to six months of UI checks, although a few opt to provide a maximum of about three months, generally when their state’s unemployment rate is low. That means if the downturn leads to layoffs, UI benefits are already generally available for up to three months in even the stingiest state. That gives federal policymakers time to review whether layoffs actually spike and further steps are needed. While things can change quickly, as of last week’s data there was scant evidence of a spike in UI claims, with remaining at low levels last seen in the late 1960s.

These demands should sound familiar. In response to the Great Recession (the “serious crisis” Rahm Emanuel didn’t want “to go to waste”), the Obama administration in 2009 enacted the American Recovery and Reinvestment Act, more commonly known as their economic stimulus law, among other policies expanding benefits. Those policies included “supporting people in need—such as by extending and expanding unemployment benefits and increasing benefits under the Supplemental Nutrition Assistance Program (formerly the Food Stamp program).”  Speaker Pelosi has admitted the current benefit expansion proposals “were plucked from the economic stimulus passed by Democrats under former President Obama in 2009.”

Further details about Democrats’ proposed policies are expected in the coming days. But these latest benefit demands are part of a longer-term trend of calling for the expansion of programs that automatically increase spending when the economy slows. After all, receipt of UI and food stamp benefits has always grown when more people are laid off or fall into need. It remains to be seen how the current demands compare with past stimulus legislation, which vastly expanded benefit eligibility, size, and duration, much less additional calls for “automatic stimulus” and now even “permanent stimulus.”

Handling coronavirus will require policy responses on a number of fronts. The administration is crafting its response and others have offered suggestions. That response may come to include key government benefits like food stamps and UI, but it should be based on facts — including the fact that key benefits like food stamps and UI are already available and poised to grow if need rises. The response shouldn’t be based on fear, and certainly not on Rahm’s rule — that to not expand benefits is simply letting a serious crisis go to waste.

This article by Matthew Weidinger first appeared at AEIdeas on March 10.