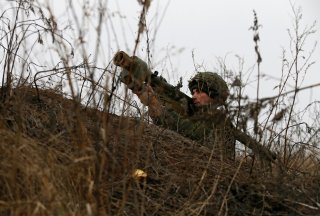 A small team from the United States Department of Defense recently returned after evaluating Ukrainian air defenses. Assistant Secretary of Defense for Public Affairs John Kirby confirmed on Monday that the team had traveled to Ukraine.

The team also discussed air defense needs with Ukrainian officials on the trip. Air Force Magazine reported on Dec. 3 that the team was on the ground in Ukraine at that time.

A Ukrainian official told Air Force Magazine that "we are in [the] process and the Pentagon is under consideration what can be supplied to Ukraine in [the] short term."

During an online discussion with the Atlantic Council titled "Will Russian Invade Ukraine Again?" the United States' former U.S. ambassador to Ukraine, John E. Herbst, explained that in his opinion, the United States should provide defense assistance to Ukraine immediately.

Strong on Land, But Feeble in the Air

Air Force Magazine reported that Stinger anti-aircraft missiles could be supplied as a stop-gap anti-aircraft bridge solution. However, the man-portable systems have a maximum altitude range of 13,000 feet, making them better-suited to targeting helicopters and low-flying aircraft than high-flying fighters and bombers.

With potentially more than 100,000 Russian troops massed on Ukraine's eastern border and reinforced with medical supplies and other military support equipment, the need for strengthened air defenses in Ukraine is urgent. Many analysts believe that January would be an ideal time for an invasion, as Ukraine's landscape would be frozen solid, allowing large-scale land formations to move without becoming mired down in mud.

Last week, Russia's government put together a draft proposal, making a list of security demands that American lawmakers and NATO allies derided as a pretext for war, potentially providing fresh impetus for improving Ukraine's air defenses. Still, if Russia does intend to invade, there may be little time remaining to improve Ukrainian defenses.