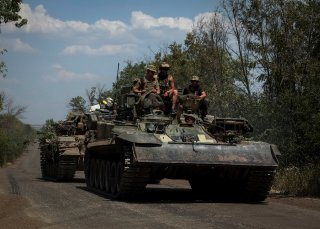 The Kremlin reaffirmed on Tuesday that it has not changed its stance on military mobilization despite the significant battlefield setbacks suffered by Russian forces in past weeks.

"At this moment—no, it is not on the agenda," said Kremlin spokesman Dmitry Peskov when asked if Russia is considering shifting to full or partial mobilization after the hasty withdrawal of Russian forces from northeastern Ukraine.

Ukrainian troops swept Russian-occupied parts of the Kharkiv region last week in a surprise counteroffensive, prompting local Russian troops to withdraw to avoid being enveloped at Izyum, Moscow’s stronghold in the area. The withdrawal, which the Russian military called an “organized regrouping,” spawned renewed calls by hawkish commentators and lawmakers to declare a “full mobilization” of Russia's resources. “Without full mobilization and transition to a military footing, including the economy, we will not achieve the proper results [in Ukraine],” Mikhail Sheremet, a lawmaker from the ruling United Russia party, told Russian media. “I am talking about the fact that society today should be consolidated as much as possible for the purpose of victory,” he said.

The Kremlin, which still refers to the conflict in Ukraine as a “special military operation,” has tried to foster a sense of peacetime normalcy at home. The Russian war effort, until now, has primarily relied on well-compensated contract soldiers and mercenaries, as well as Russian-aligned separatists drawn from the breakaway Donetsk and Luhansk People’s Republics in Ukraine’s eastern Donbass region.

“We are at a point now when we must understand, it is absolutely impossible to defeat Ukraine using the current resources with which Russia is waging war, in the style of a colonial war methods, using contract soldiers, mercenaries, no mobilization,” said the liberal former politician Boris Nadezhdin on a Russian television broadcast. “Either mobilization and full-scale war, or we get out,” Nadezhdin added, urging Moscow to restart peace talks with Ukraine as soon as possible.

Experts say the Kremlin has avoided mobilization since the invasion commenced on February 24 because forced conscription and the transition of Russia’s beleaguered economy to a war footing would be deeply unpopular in Russia’s major population centers, including Moscow and St. Petersburg.