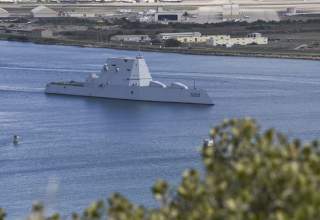 The Type 055 will probably do for China what the Aegis cruisers and destroyers — nearly 100 of them — are already doing for the United States. That is, protecting the carriers. Zumwalt, however, could make near-shore fire support possible again — a feat the Type 055 surely can’t duplicate.

On Oct. 15, 2016 in Baltimore on the U.S. East Coast, the U.S. Navy commissioned the guided-missile destroyer USS Zumwalt into service following a protracted and costly development.

But she’s not alone in her weight class. While the Americans were celebrating Zumwalt’s entry into service, on the other side of the world at a shipyard in Shanghai, the Chinese navy was hard at work on its own 14,000-ton-displacement surface warship.

The Type 055 just began major construction and probably won’t enter service before 2018. But when she does, she could be the biggest and most powerful surface warship in Asia.

It’s unclear exactly what the Type 055 will do, but indications are that she’ll function as the main air-defense escort for China’s new domestically-built aircraft carrier, currently under construction at Dalian in northern China.

Consider the Type 055’s superstructure facets, apparently meant to support radar emitters similar to the SPY-1 emitters that are part of the U.S. Navy’s Aegis air-defense system. U.S. Navy flattops never go anywhere without at least one Aegis-equipped cruiser and several Aegis destroyers as escorts. Zumwalt, notably, is the first new major American surface combatant class in 30 years not to have Aegis.

The Type 055 likely won’t be a direct competitor of Zumwalt. Rather than integrating Zumwalt and her two sisters into carrier battle groups, the U.S. Navy will probably deploy the giant destroyers on solo cruises near land in order to take advantage of the vessels’ radar-evading hull-form and their twin, 155-millimeter guns, which can fire projectiles a distance of at least 80 miles in order to support amphibious landings and special operations.

The apparent differences between the Type 055 and the Zumwalt class are stark.

The Type 055 boasts a fairly traditional hull-form and superstructure, with only modest attempts to reduce radar-signature by way of an enclosed forward deck, an angular front superstructure and an enclosed main mast.

By contrast, Zumwalt is stealthy from the keel up, with a distinctive downward-sloping “tumblehome” hull and fully enclosed sensors and gun turrets. Arguably, Zumwalt and her sisters have greater need of stealth, as they could sail alone and close to enemy shores.

Assuming the Type 055 is indeed primarily an air-defense ship, she could travel in close company with a carrier, other escort vessels and even logistics ships, none of which are particularly stealthy. Building stealth into the Type 055 would represent an inefficient use of resources — assuming China’s naval architects are even capable of designing a ship as stealthy as Zumwalt is.

The Type 055 reportedly boasts 128 vertical launch cells for anti-air missiles and other munitions — six cells more than the U.S. Navy’s own most heavily-armed surface warships, the venerable Ticonderoga-class cruisers.

Zumwalt carries just 80 cells. These are arrayed along the edges of Zumwalt’s hull — the idea being that missile cells can also function as “armor,” partially absorbing the force of a missile or gun hit. The Type 055 apparently carries her own missiles in centrally-installed clusters, like the Ticonderogas and most other warships do.

In many ways, the Type 055 is evolutionary rather than revolutionary. Largely conventional in form and function, the Type 055’s major innovation is, simply put, her size.

Zumwalt, on the other hand, pushes the boundaries of warship-design and could potentially open up new operational concepts. Not since the age of the battleship have navies deployed large warships close to enemy shores for the purposes of bombarding targets on land. Radars and guided missiles made the mission too dangerous for today’s flimsy, easy-to-detect surface combatants.

The Type 055 will probably do for China what the Aegis cruisers and destroyers — nearly 100 of them — are already doing for the United States. That is, protecting the carriers. Zumwalt, however, could make near-shore fire support possible again — a feat the Type 055 surely can’t duplicate.

It could turn out that sheer size is the only meaningful characteristic America and China’s respective 14,000-ton surface warships have in common.