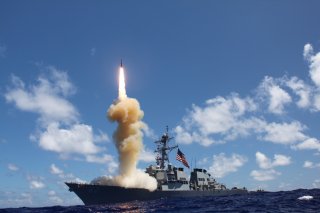 For many years, China’s infamous “carrier-killer” missiles have been making headlines for their ability to hold U.S. Navy aircraft carriers at risk and to prevent the U.S. Navy from safely operating close to the Chinese coastline for sea-launched aircraft to attack.

There have been numerous Chinese test firings and ominous warnings that these weapons could, in effect, “back off” U.S. carriers by virtue of demonstrating an ability to destroy them. The Dong Feng-26 (DF-26) is China’s most powerful anti-ship missile. It’s 46 feet tall and weighs 44,000 pounds.

The DF-26 comes with a “modular design,” meaning that the launch vehicle can accommodate two types of nuclear warheads and several types of conventional warheads.

With a range of up to 2,500 miles, a 4,000-pound payload, and satellite targeting, the DF-26 could, in theory, strike U.S. Navy warships across the western Pacific Ocean. “Even when launched from deeper inland areas of China, the DF-26 has a range far-reaching enough to cover the South China Sea,” an unnamed military expert told Global Times in a report several years ago.

However, upon closer examination of public comments from senior Navy officials, there appears to be room for debate on the missile’s effectiveness. While the DF-26 poses a serious threat, some of the analysis surrounding the threat might accurately be assessed as “hype” given the steady stream of ongoing advances in layered aircraft carrier and Carrier Strike Group defenses.

When asked about these “carrier killers,” senior Navy officials have been clear that their aircraft carriers can “operate wherever needed to attack,” even if they do not dismiss the threat posed by China’s missile forces.

Although many specifics related to U.S. Navy ship defenses are understandably not available for security reasons, the Navy does speak publicly about the rapid maturation of its many “layered” ship defense technologies. This includes the emergence of ship-based lasers for offensive or defensive use—which can also track and “incinerate” or “disable” incoming missiles—newer electronic warfare applications able to find a “line-of-bearing” or track the electronic signature of a missile’s guidance system to “jam” its flight trajectory, and even new, innovative platforms like the Navy’s MQ-25 Stingray carrier launched refueler drone, which can double the range of ship-launched fighter jets.

This means that Navy destroyers will sail with the ability to incinerate enemy drones with great precision, stunning, burning, or disabling them. And not only are lasers quiet, low-cost, scalable, and precise, but perhaps of even greater significance, they fire at the speed of light. When it comes to ocean warfare, speed is increasingly vital. New technologies are rapidly changing the tactical equation for war planners around the world.

Lasers such as HELIOS also bring a substantial optical component, meaning they can act as a sensor to track targets and help with necessary surveillance missions. In some instances, lasers could also enable surface warships to close in more fully upon enemy positions, given that deck-mounted guns could be supplemented by high-speed laser weapons and engineered to pinpoint narrow target areas with precision-guidance technology.

“HELIOS is designed to be compatible with the ships and integrate seamlessly into ships, cooling systems and power systems. There is operational hardware that integrates into the ship hardware,” Jon Rambeau, vice president and general manager of Lockheed Martin Rotary and Mission Systems and Integrated Warfare Systems and Sensors, told The National Interest in an interview last year during an earlier phase of development with HELIOS.

The Surface Electronic Warfare Improvement Program (SEWIP) Block 3, for which Northrop Grumman is the prime contractor, advances the U.S. Navy’s electronic warfare (EW) capabilities by adding an advanced, offensive electronic attack capability and a forthcoming capability to integrate EW with Information Operations (IO), among other things. SEWIP B3 is an electronic attack weapon that is not limited to locating, jamming, and disrupting inbound threats; it is also capable of conducting offensive operations against enemy communications networks, datalinks, radar systems, or other electronic sources. SEWIP Block 3 is currently designed for installation on Navy’s DDG-51 destroyers and is on track to be operational in the next few years, Northrop developers explain. Navy officials have stated that the service’s new Constellation-class frigate is also being engineered for configuration with advanced EW systems.

The SEWIP Block 3 EW system uses a collection of sixteen Active Electronically Scanned Arrays, or AESAs, to emit groups of targeted but individually separated “pencil” beams. “One advantage of an AESA is that it can generate pencil beams as opposed to a transmission of wide overlapping beams,” Mike Meaney, vice president for Land and Maritime Sensors at Northrop Grumman, told The National Interest in an interview during an earlier phase of SEWIP Block 3 development. “These pencil beams are narrow and specifically focused – allowing the system to put energy only where it is needed as the track progresses quickly.” A future concept is to connect crucial intelligence gathering technology with EW attack and defense systems by synthesizing IO & EW. Part of this is accomplished through consistent continuous software upgrades and threat monitoring.

By transmitting a narrower signal, an EW weapon can greatly reduce its detectability and therefore be less likely to reveal its location. Naturally, the larger and wider spanning the electronic emission, the easier it is for enemies to detect. In effect, Meaney explained that the advanced SEWIP system enables commanders to limit the adversary to “seeing what you want them to see.”

Added to these factors is an upgraded, if more traditional, arsenal or envelope of “kinetic” defenses or interceptors capable of taking out incoming attacks. By aligning with ship-based radar and fire control, interceptor missiles on Navy ships are engineered to destroy enemy anti-ship missiles, ballistic missiles, and even some aircraft. Ship-fired interceptors, largely fired from Vertical Launch Systems on Navy destroyers and cruisers, exist in a “tiered” capacity; a ship-based surface-to-air RIM-174 Standard Missile 6 (SM-6) is the longest-range interceptor capable of tracking long-range ballistic missiles and even intercontinental ballistic missiles approaching their terminal phase—when the missile begins to reenter the atmosphere—especially if firing the latest SM-6 Block IIA which has a longer-range and improved guidance system.

The DF-26 could also be vulnerable to the American SM-6. The U.S. Navy’s SM-6 interceptor missile is theoretically capable of hitting a DF-26 in two phases of its flight—shortly after launch, as the Chinese missile is climbing and gaining speed, and then again in the DF-26’s terminal phase, as it arcs down toward its target. This is particularly true in light of several key SM-6 software upgrades to improve its “dual mode” seeker, newer technology capable of sending a forward “ping” itself without needing a ship-based illuminator for targeting. This, among other things, enables the missile to adjust course and maneuver in flight, the kind of ability well-suited to track and destroy incoming Chinese anti-ship missiles. The SM-6 can also intercept cruise missile threats from “beyond the radar horizon” through the Navy’s now-deployed networked system called Naval Integrated Fire Control-Counter Air (NIFC-CA). This system uses an aerial gateway such as an E-2D Advanced Hawkeye or even F-35 stealth fighters to operate as a “node” able to detect approaching threats from distances not available to ship-based radars and networks. The system then can send the threat data to ship-based command and control systems which then can launch an SM-6 to destroy the threat. This system has proven so effective that the Navy is also developing NIFC-CA for potential offensive use as well.

Navy warships also can deploy the Evolved SeaSparrow Missile Block II (ESSM), an interceptor weapon which can operate in “sea-skimming” mode to intercept incoming cruise missiles flying at lower altitudes parallel to the surface. Even closer in threats can be hit by a medium-range surface-to-air RIM-66 Standard MR (SM-2) or infrared homing surface-to-air RIM-116 Rolling Airframe Missile (RAM), although some of these might be ill-equipped to fully destroy a large anti-ship missile. However, these missiles can also target enemy small boats, drones, helicopters, warships, and even some incoming gun, rocket, and artillery rounds. The closest in ship defense is something called the Close-In-Weapons-System (CIWS), a Phalanx interceptor gun able to fire hundreds of small metal projectiles per second to “blanket” an area with suppressive, defensive fire. The CIWS system, which was upgraded years ago to a Block 1B variant that is able to not only destroy incoming air threats but also take out surface threats such as small boats and surface attacks, is now deployed on the Navy’s destroyers, cruisers, amphibious assault ships, and possibly even aircraft carriers.