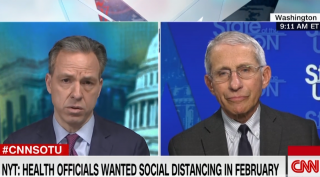 Yesterday President Donald Trump returned to his regular stomping grounds—Twitter—to potentially caution Dr. Anthony Fauci, Director of the National Institute of Allergy and Infectious Diseases (NIAID), from making statements critical of the administration’s response to the coronavirus pandemic. This is the latest and most public tension between Trump and Fauci, who has become one of the nation’s most recognizable public health officials. Is his job security now at risk?

Yesterday, in an interview with CNN, Jake Tapper asked Fauci whether or not the United States could have weathered the pandemic better if the Trump administration had taken earlier action. Tapper compared the United States to South Korea, which had their first outbreaks at similar times, but while South Korea was able to flatten their curve in a matter of weeks, the U.S. now purportedly has the largest number of coronavirus cases in the world.

“You know it isn’t as simple as that Jake, I’m sorry” Fauci responded. “To just say this is all happening because we got started too late, obviously, could you have done something a little bit earlier, would it have had an impact? Obviously. But where we are right now is the result of a number of factors: the size of the country, the heterogeneity of the country. I think it’s a little bit unfair to compare us to South Korea…so obviously it would have been nice if we had a better head start, but I don’t think you could say that we are where we are because of one factor. It’s very complicated Jake.”

Tapper continued to press Fauci, inquiring whether American lives would have been saved if the government had begun implementing social distancing requirements in the third week of February—when Fauci and his team recommended them—instead of waiting until mid-March.

“You know Jake, again, it’s the what would have, what could have. It’s very difficult to go back and say that,” Fauci responded. “I mean obviously, you could logically say that if you had a process that was ongoing, and you started mitigation earlier, you could have saved lives. Obviously, no one is going to deny that. But what goes into those kinds of decisions is complicated. But you’re right. I mean obviously, if we had right from the very beginning shut everything down, it may have been a little bit different. But there was a lot of pushback about shutting things down back then.” Fauci did not specify whether this pushback came from the Trump administration or public opinion.

Despite Dr. Fauci’s rejection of Tapper’s framing, some of the president’s supporters interpreted his words as throwing Trump under the bus for not taking earlier action. One of them, DeAnna Lorraine, is a former Republican challenger of Speaker of the House Nancy Pelosi. Lorraine tweeted that, “Fauci is now saying that had Trump listened to the medical experts earlier he could've saved more lives. Fauci was telling people on February 29th that there was nothing to worry about and it posed no threat to the US public at large.” This is a reference to Fauci saying that the “country as a whole…still remains at low risk” despite there being a coronavirus outbreak in Washington state. Lorraine closed the tweet by saying “Time to #FireFauci…”

Donald Trump retweeted this message, saying “Sorry Fake News, it’s all on tape. I banned China long before people spoke up. Thank you @OANN.” The president was referencing his February 2 partial ban on foreign nationals arriving from China.

While the retweet did not address Fauci or firing him specifically, it’s being interpreted by commentators as a warning. Anthony Fauci has been director of NIAID since 1984 and has served under six presidents. A poll conducted by Quinnipiac last week found that 78% of Americans approve of Dr. Fauci’s performance during the pandemic, while 46% approve of President Trump’s.