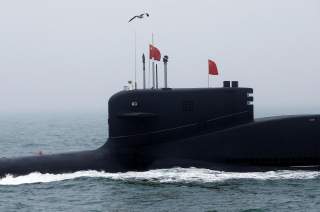 Last week, world media was abuzz with reports that China had test-fired the JL-3, its most advanced submarine-launched ballistic missile.

But did it really happen?

Two anonymous Chinese military sources told the South China Morning Post that the test was of an older ballistic missile.

“A missile test by the People’s Liberation Army on Sunday did not feature the country’s next-generation long-range weapon, but instead involved a mid-range Dongfeng missile refitted with improved guidance systems,” one source said.

The denials are part of a bizarre frenzy that began on June 2, when people in northeastern China reported seeing an object “with a glowing fiery tail streak across the sky” at 4 a.m. on June 2, according to China’s state-influenced Global Times news site. Convinced they had seen a UFO, they posted videos and photos on Weibo.

But Western defense analysts, noting Chinese maritime authorities had ordered the Bohai Bay area of the Yellow Sea closed to traffic that Sunday, speculated that the Chinese Navy was testing the JL-3. The first JL-3 flight test had also been conducted from Bohai Bay in November 2018. Once completed, the new missile, with an estimated 5,600-mile range, will enable Chinese submarines in the Western Pacific to hit the continental United States.

“The event was observed in Shandong, Shanxi, Hebei, and Henan provinces, which would be consistent with a missile fired from the Bohai Sea following a flight path into the desert areas of western China where ballistic missile test firings usually impact,” reported defense publication Jane’s 360.

The situation became even more confused after China’s military, the People’s Liberation Army, started playing mind games. As the Post pointed out, on the day after the launch, “the PLA’s Rocket Force, the unit that runs China’s missile program, posted a photo of a missile on a mobile launcher on Weibo, the Twitter-like microblogging platform, accompanied by the rhetorical question: “Do you believe in UFOs?” Then the Chinese navy posted a photo of a missile being launched from the sea, and asking the same question, “Do you still believe in UFOs?”

This spurred Chinese media to report that the object was a JL-3. But a Chinese military source told the Post that it would be crazy for Beijing to conduct such a provocation amid U.S.-China tensions.  “China wouldn’t test a strategic missile like the JL-3 at such a sensitive time, when China and the US are locked in a trade war and Chinese generals are meeting foreign counterparts in Singapore,” the source said.  In addition, “according to publicly available video, the object’s flight path was different from and its height much lower than that of the JL-3.”

Then again, if this was just a routine test of an older missile, why did the PLA post photos on social media? Did no one question whether the West might assume this was a JL-3 test?

Either way, as NASA and the Pentagon can attest, it’s not uncommon for ordinary citizens on the ground to mistake a rocket for something extraterrestrial. A glowing object streaking over California in 2017 sparked fears across social media that UFOs had landed, or North Korea had launched an ICBM attack. It was actually a SpaceX commercial rocket launched from Vandenberg Air Force Base.

So what happened in China? Probably the only ones who know for sure at this point is the People’s Liberation Army, and perhaps American, Russian and Japanese intelligence agencies who have a keen interest in Chinese missile development. What is clear is that China is developing and testing a new submarine-launched ballistic missile. Don’t be surprised to hear about more fiery objects in the sky.