Did a Convicted Killer Design the M1 Carbine? 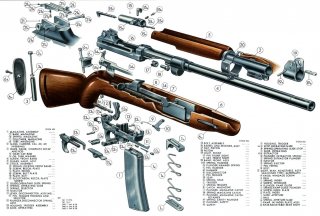 While the M1 Garand rifle and the Thompson submachine gun were named for their respective designers, the M1 Carbine was not named for anyone in particular. Plenty of other “M1s” —from the bazooka to steel helmet—didn’t get the “Garand” treatment, but in the case of the carbine it has lead to confusion that it was just a smaller version of the main battle rifle.

However, another reason could be due to the fact that one of the weapon’s designers, David Marshall Williams—later known as “Carbine” Williams—was also a bootlegger and convicted murderer.

Then there is the fact Williams’ contribution may have been overstated just a bit.

In fact, because of his conviction and colorful life, Williams had become a bit of a folk legend—in small part due to the 1952 Hollywood film Carbine Williams, which chronicled his story. In the movie, Williams is even shown to have invented the M1 Carbine using scrap metal and crude machinery while serving a prison sentence in the 1920s. His actual “true story” was far less lively than Hollywood would have us believe, but Williams was still quite a character.

Born in November 1900, he wasn’t yet “Carbine Williams” and instead was simply known as “Marsh.” Moreover, while he developed a habit for tinkering, he had dropped out of school in the eighth grade and then went to work for a period on the family farm before taking a job at a blacksmith shop. Claiming to be seventeen he enlisted in the U.S. Navy, but was discharged when it was learned he was just fifteen. Next, he enrolled in the Blackstone Military Academy but failed to complete the first semester after he was expelled for theft of government property—which included several rifles and 10,000 rounds of ammunition.

Today such actions would result in one being prohibited from ever legally touching a firearm again, but we’ll get to that. In the meantime, he married a year later, yet he certainly didn’t “settle down.” To supplement his meager income, Williams operated an illegal still and produced what by some accounts was quality moonshine.

It also resulted in tragedy when, in 1921, his North Carolina bootlegging operation was raided by the Cumberland County Sheriff’s Department and Williams reportedly engaged in a shootout with the deputies. During the ensuing firefight Deputy Sheriff Alfred Jackson Pate was struck by two bullets and killed.

Williams was charged with First Degree Murder and faced the death penalty. However, Williams maintained that while he had, in fact, fired the shots, he never intended to kill the deputy. He also claimed he gave the rifle to one of his “employees”—and that it was Ham Dawson who fired the remaining shots with the intent to kill said deputy.

The evidence was strong enough that the first trial ended in a hung jury, but rather than risk a second trial, Williams entered a plea of guilty to Second Degree Murder and received a sentence of thirty years hard labor.

In what would never happen today, Williams spent his limited free time sketching diagrams for firearm mechanisms—and that gained the attention of the guards and eventually the prison superintendent, H.T. Peoples. Instead of being worried, Williams—who had become a model inmate—was given access to the prison workshop, where he repaired and maintained prison equipment. He was also allowed to work on his firearm designs and built four semi-automatic rifles while in prison.

Clearly, the 1920s were a vastly different time than today!

Seeing that he was finally doing something good, his mother provided Williams with a drafting set and technical data on guns, while he was also provided with patent attorney contacts. However, they were unable to help as he was incarcerated and the law at the time prevented an incarcerated felon from filing for a patent.

The efforts did draw attention—this time in quite a positive way.

It was apparent to many that Williams had finally settled down, and his family, along with the sheriff who arrested him and even the widow of the man he was convicted of killing, all worked on a campaign to commute his sentence. It was clear Williams was a man who deserved a second chance, and in December 1927, North Carolina Governor Angus McLean commuted the thirty-year sentence to just ten years with a maximum of twenty years. Williams was granted parole in 1929 and released from prison entirely in 1931.

Once out of prison, Williams was finally able to file several patents for his designs, and those included the use of high-pressure gas to operate a semi-automatic rifle. Two of his most significant designs were for a “floating chamber” and for the short-stroke gas piston. Both proved crucial in the development of the M1 Carbine.

Despite the fact that he was a convicted felon, Williams’ design caught the attention of the United States Ordnance Department, and he received a contract to modify the .30 caliber Browning machine gun to use a floating chamber system to fire .22 caliber rimfire ammunition during training exercises.

Williams was subsequently contracted by Remington Arms to develop a .22 long rifle for the commercial market. While his design wasn’t accepted by Remington, it was redesigned by the company as the Model 550. Later patents for the rifle did credit Williams’ earlier patent for the floating chamber design.

However, Williams’ impact on firearms came when he went to work for the Winchester Repeating Arms Company. There, he was charged with refining the .30-06 Winchester M2 Military Rifle, which was designed by Ed Browning, the brother of famous gun designer John Browning. In the end, the M2 design was rejected and the U.S. military stuck with the M1 Garand.

Yet, the U.S. Ordnance Department also announced that it needed a light rifle that would replace both the M1911 pistol and Thompson submachine gun. Williams, along with other designers at Winchester, developed a prototype that would become the M1 Carbine, which was approved in October 1941.

The story of the gun’s development even was made into a 1952 movie Carbine Williams, starring James Stewart. According to some firearms historians, the movie overstressed Williams’ role in the carbine’s development, but it was still his short-stroke gas piston design that still made the gun a success.