Did the Earth's Enviornmental Crisis Start 12,000 Years Ago? 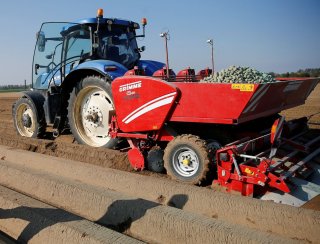 Our global civilization may be doubting its mastery of the Earth as we temporarily close the shutters on many of our societies because of COVID-19. Among ecology scholars, one conversation has been about how wildlife and habitat destruction and ecosystem destabilization could be linked to our current pandemic. Some even argue — as ecology scholar Vijay Kolinjivadi recently wrote in Uneven Earth — the coronavirus is a product of capitalism’s own making.

The head of the United Nations environment program and other experts say the current pandemic is a warning sign from nature. They believe this may be the beginning of the spread of more infectious diseases.

This is no new development, however. The story of how our current environmental state came to be is over 12,000 years old.

Are we the virus?

In the wake of our recent retreat indoors, animals have begun to reclaim human-dominated spaces. Our stalled economy has led to improved air quality in major cities. The immediate effects of our societal contraction are stark.

This has brought to the surface a perennial narrative and fear, quickly rejected, that humans are the true virus and that COVID-19 is the Earth’s vaccine. However, people have been right to point out that a small minority of actors — large corporations and governments — are responsible for the vast majority of ecological destruction and carbon emissions.

As we debate the proposals for what the world should look like after the virus, we must discuss the roots of what got us here. Doing this will help us change in a systemic way, rather than merely at the surface.

Origin stories and the Anthropocene

We have changed the planet so much that it can be detected in the very crust of the Earth. This has led some to name our current age after our species, calling it the Anthropocene.

When did the Anthropocene start? An often suggested answer is the beginning of the Industrial Revolution, when some humans began to change the planet at a remarkable clip. This includes pumping out the first significant greenhouse gas emissions.

Not all humans beings have participated in this process, however. This is why some have argued for naming our era after the social and economic arrangements that created it. The development of capitalism is often singled out as the defining feature for our era.

But we have to look further back for the genesis of our current set of crises: environmental, inequality and domination, and epidemic disease affecting both us and domesticated animals, including COVID-19. They all have their roots in the first tilled soils.

The agricultural revolution began approximately 12,000 years ago and sparked a cascading shift in human-environment relations among certain peoples that has yet to end. The domestication of cereals and livestock, on which this revolution is based, created the population sizes and densities that provide the basis for epidemic disease.

Fanning out from those initial centres, the agricultural revolution arrived in the Americas (though it too had already begun here), carried and enacted by European settlers — with disastrous results.

It continues in the Amazon rainforest as the forest is cleared, mined and planted. Indigenous peoples are again at major risk from introduced disease.

Agriculture began not long after the end of the last major ice age. The stable climate conditions made planting grains viable. Agriculture sprouted in multiple locations across the world at a similar time.

However, of the roughly 300,000 years of the existence of modern humans, our current style of agricultural civilization comprises at most four per cent of humanity’s time on the planet. This is the era that is taught to students in schools. But this is only a single strand of the human story.

This narrative is our culture’s origin story. No wonder it is so hard for us to think there are any viable alternatives. The idea of the Anthropocene fuses the very definition of our entire species with a single way of life that itself has been a relatively recent development.

The vast majority of humanity’s time has been of us living in a quite different manner. Some Indigenous Peoples, from the Amazon to the Bay of Bengal continue to live in some approximation of that different way of life to this day.

Implicit within the idea of the Anthropocene is not only that all these societies are unimportant, but also in a certain way, that they are not even really human. It further lends a sense of inevitability to our present. It seems to say that our trashing of the planet is unfortunately, just an inescapable part of our nature. Sounds like “we are the virus” - doesn’t it?

Perhaps we need a new frame and name for our current era instead of the Anthropocene. This might allow us to see alternative futures.

This does not mean we need to dismantle our modern structures to live as hunter-gatherers. Nor does it mean that hunter-gatherers live without hardship, or that the rest of humanity has fallen from grace, although climate destabilization may eventually make current agricultural practices impossible.

There are many aspects and achievements of agricultural civilization such as modern medicine, the internet and scientific advancements, that if we were to lose them, it would diminish us. We are relying on many of the most highly developed medical and logistical ones during this pandemic.

After the pandemic — and if we are to survive this geologic era — we must re-establish mutually enhancing relationships with the Earth and each other. There may be no better way to do this than to turn to the societies that have succeeded, such as the hunter-gatherer societies that have generally discouraged hierarchy and maintained sustainable and flourishing relationships with land.

Responses to the COVID-19 pandemic are being refracted through inequality, private property, class structures and state power — all agricultural inheritances. There is a temptation, for instance, for states to tighten control over human and non-human populations.

These patterns have recurred in crisis for the past 12,000 years, and there are troubling signs of it already happening throughout the world.

We must forcefully resist this inclination. We must instead endeavour to use this moment, and our best civilizational inheritances, in the mitigation of our worst ones, and at the service of just and sustainable cultures. By doing so might we live not in old, but in utterly new ways.