Did the FCC Make an Error That Will Harm the Military's GPS Network (Think China)? 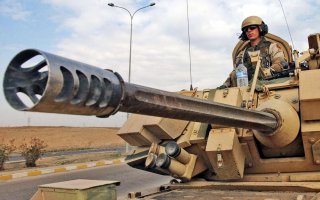 What if a drone-launched, precision-guided Hellfire missile or fighter-jet air-dropped bomb was heading directly toward a designated enemy target, but it was disabled or its trajectory were suddenly jammed, altered or thrown off-course? Even worse, what if its flight path were sabotaged, taken over or directed toward a friendly target?

Or imagine a dismounted infantry unit is navigating rigorous, uneven terrain while under enemy fire, when their hand-held GPS location device showing friendly and enemy troop locations was cut off or fed false information?

While there naturally continue to be ongoing efforts to “harden” GPS signals against enemy interference, these types of concerning scenarios may become even more likely to take place under one dangerous scenario. The problem is what would happen if a firm’s emerging 5G network is permitted to further mature into American and U.S.-allied markets for GPS-types of networking technology.

For example, a U.S.-based private sector firm by the name of Ligado is advancing a terrestrial 5G type network purported to be much stronger, faster and more efficient than current GPS technology when it comes to location, navigational, networking and targeting data, among other things. However, not only is there debate regarding whether it may be a suitable alternative to GPS, but using the network may simply break up or interfere with GPS, forcing current GPS networks to be retrofitted, adjusted or replaced, according to U.S. government officials familiar with the technology.

“If Ligado’s system is allowed to broadcast, it breaks up GPS and those devices that use GPS have to be retrofitted,” a senior U.S. government official told TNI. “Ligado uses a 10 watt signal, which is stronger than GPS. It generates too much extra energy and overloads a lot of the GPS receivers and interferes with GPS chips.”

Ligado’s terrestrial wideband wireless transmitters operate at 10 watts. They are stronger and closer-in than space-based GPS signals which weaken on their way to earth. Therefore, the introduction of Ligado could, according to technical experts and senior U.S. military observers, cause serious problems for U.S. military networks.

The bottom line is this; if GPS needs to be substantially altered, or even replaced, it will open up the international market for alternative technical systems intended to perform similar functions. This could potentially create a new avenue for elements of China’s widely-advancing GPS alternative system, called the BeiDou Navigation Satellite System. The Chinese already operate BeiDou and routinely launch satellites as part of a decided global effort to rival GPS.

Should major adjustments, or even replacements to GPS be required, a wide range of alternative software, chips, computer networks and satellite technologies would become available options on the global market. This potential phenomenon is exactly what concerns U.S. military weapons developers in charge of developing and sustaining GPS systems.

“There is no need to put GPS at risk. Mid-band spectrum for 5G exists, and DOD is working with industry on a dynamic spectrum sharing framework. Ligado’s proposal is unnecessary. Ligado’s proposed network lacks the bandwidth, power or global ecosystem to deliver robust 5G services. The only beneficiaries are Ligado shareholders,” a DoD statement reads.

While Ligado’s technology, which relies upon a land-based 5G network using Mobile Satellite Service Band, is not yet integrated or fully operational, the prospect of it being integrated into U.S. markets has caused great concern among U.S. military leaders. Specifically, an FCC approval of Ligado’s technical initiatives has inspired a range of Congressional and U.S. military decision makers to request that Ligado’s network not be allowed to move forward for national security reasons. Simply, it would introduce serious new risks that Chinese government-owned technologies could infiltrate the global technical communications market, which of course includes United States, NATO and other allied systems.

“If BeiDou gets into our military systems, it could provide false timing or bad position information,” the senior U.S. government official explained. “It would allow nefarious Chinese technology to infiltrate U.S. systems along the supply chain to include command and control systems and computer networks.”

The official explained that while contractors supporting the U.S. market could be vigilant regarding what kinds of technologies or systems are integrated, the subcontracting process is often so detailed, small-scale and elaborate that it could make things difficult, if not impossible to track. In fact, BeiDou elements are already in use in some commercial U.S. technologies.

“The FCC has not banned the use of BeiDou systems in things like some cellphones and computer chips. It is not being used in U.S. military equipment, but the threat could easily come up,” the U.S. official explained.

Some members of Congress are expressing concern as well. In fact, in recent years Congressional leaders have already voiced concern regarding the possibility that Chinese-engineered parts might be making their way into some U.S. weapons systems. This is exactly the kind of thing which caused concern among those aware of the FCC’s decision regarding Ligado. China already has a well-known and documented history of attempted cyber intrusions into U.S. networks and computer systems.

“I am disappointed by the FCC’s Ligado decision. The FCC is the only federal government entity that thinks this is a good idea,” Congressman Mike Turner, (R-Ohio) said in a written statement. “I was concerned when I asked the FCC officials on the call if they had convinced any other agency this was good policy or if they had made an attempt to receive a classified briefing on the effects of their decision and their answer was no.”

The senior government official explained that a concern regarding the possibility of deliberate Chinese infiltration is substantial.

“The Chinese gave us COVID 19. Let’s not allow Ligado - which would open the door to even more (technological) viruses - to move forward,” he said.

“I’m disappointed but not surprised to hear the FCC has made no effort to review necessary, classified materials related to the Ligado application. If they had, I highly doubt they would have proceeded with their order,” he said in a statement.

Kris Osborn previously served at the Pentagon as a Highly Qualified Expert with the Office of the Assistant Secretary of the Army - Acquisition, Logistics & Technology. Osborn has also worked as an anchor and on-air military specialist at national TV networks. He has appeared as a guest military expert on Fox News, MSNBC, The Military Channel and The History Channel. He also has a Masters Degree in Comparative Literature from Columbia University.