Did Netanyahu Really OK F-35 Stealth Fighters to the UAE? 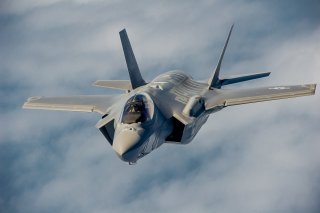 The Lockheed Martin F-35 Lightning II Joint Strike Fighter was designed to give air superiority to its users, and as such is a weapon that could help win wars. However, the F-35 could also damage or at least otherwise impact the prospect of peace in the Middle East.

Even as Israel and the United Arab Emirates move closer to normalizing relations, a sticking point has remained the fifth-generation fighter aircraft. Israel is currently the only Middle Eastern nation to operate the advanced jet aircraft and the nation maintains a policy of having weapons more powerful and capable than its neighbors. As Israel has fought several wars with various Arab states since 1948 this has helped ensure that its people aren't defeated and driven into the sea.

At issue is the fact that UAE has sought to adopt the fighter aircraft as well, something that the government in Jerusalem publicly condemned.

Now it seems that Israel might not be so opposed after all.

The Times of Israel, quoting a story that was first reported in The New York Times, noted that Prime Minister Benjamin Netanyahu has privately removed his opposition to the sale of the American F-35 to the UAE. In addition, the UAE could also purchase Reaper Drones and the EA-18G Growler jets, which could give the UAE a considerable military advantage as it could "erode the effectiveness" of Israel's air defense capabilities.

However, while the UAE has never recognized the state of Israel, the two countries have never fought a war against one another. Both are relatively young nations, with Israel gaining its independence in 1948 and UN recognition a year later. The UAE was granted full independence Great Britain only in 1971.

The UAE has sought to purchase the F-35 fighter jets for several years, but the deal was held up due to the U.S. commitment to protect Israel's military edge over its Arab neighbors.

Despite the report in the media, Netanyahu denied last week that claim.

"Repeating a false allegation against Prime Minister Netanyahu does not make it true," read a statement. "At no point in talks with the United States leading to the historic breakthrough with the United Arab Emirates on August 13, did the Prime Minister give Israel's consent to the sale of advanced weapons to the Emirates."

While the Emirates reacted with some anger and frustration given their commitment to the peace process, it has been suggested that the deal remains on the table and that the Israeli government simply needed to make a public protest.

The U.S. has for its part maintained that the jets would not in fact erode Israel's edge as they would only be used against the common enemy of Iran, while at the same time the UAE and Israel could move towards a de facto alliance similar to the one that exists between Jordan and Israel.

The final sticking point and even decision may not be resolved or made in Jerusalem or Abu Dhabi but rather in Washington, as by U.S. law any sale of weapons that could potentially harm Israel's military edge must go through Congress.