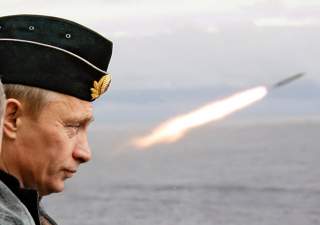 Did Russia’s nuclear-powered cruise missile just blow up? Or was it something else that spewed a radioactive cloud and triggered radiation alarms?

An accident at a military test site in northern Russia has sparked speculation of a mishap with the 9M730 Burevestnik ("Petrel"), an intercontinental cruise missile powered by a nuclear reactor.

Russia has confirmed an explosion during an August 8 test at Nyonoksa, a military testing base on the White Sea. The explosion killed employees of Rosatom, Russia’s state-owned nuclear energy corporation. “Five Rosatom staff members died and a further three people were injured in a tragic accident that took place during tests on a liquid propulsion system involving isotopes at a military facility in Arkhangelsk region,” stated a brief Rosatom announcement.

After Russian media reports that radiation in the area had spiked to 200 times normal background levels, Russian news agency TASS hastened to claim that the dose was less than that of a medical X-ray—though the village near the explosion has been ordered to evacuate, raising memories of the Chernobyl incident.

The fact that the accident involved rocket propulsion and radioactive isotopes immediately led to speculation that the Burevestnik (NATO code name SSC-X-9 Skyfall) was involved. In fact, President Donald Trump went on Twitter to announce that “we have similar, though more advanced, technology. The Russian ‘Skyfall’ explosion has people worried about the air around the facility, and far beyond. Not good!”

But Edward Geist, an expert on Russian nuclear history at the RAND Corp. think tank, cautioned that it is premature to assume that the Petrel was the culprit.

“The case that this may be associated with the nuclear cruise missile is pretty circumstantial,” Geist told The National Interest. For example, the site of the accident is a closed Russian military town that is “associated with the testing of all kinds of missiles.”

In other words, something happened, and that something involved fatalities and release of radiation. But we can’t be sure, and the Russian government isn’t likely to tell us.

Nonetheless, Geist suspects that Russia is expanding on Cold War-era Soviet research into nuclear aircraft propulsion. During that era, both the U.S. and the Soviet Union explored nuclear-powered manned aircraft. They also explored nuclear-powered missiles, such as the notorious 1950s U.S. Project Pluto, a nuclear-powered, low-altitude, supersonic ramjet missile that would have dropped atomic bombs over the Soviet Union—and poisoned the Russian countryside with radioactive exhaust from its reactor.

While the United States abandoned those projects by the 1960s, Soviet research continued into the 1970s, according to Guest. It is more than possible that Petrel is based on those old nuclear ramjet designs.

The problem isn’t with nuclear power per se. NASA uses Radioisotope Power Systems—fueled by plutonium—for its spacecraft exploring Mars, Saturn, Pluto and the Voyager probes that have journeyed beyond our solar system. Operating so far from the Sun, solar power isn’t an option. Despite some public fears about launching a plutonium device through the atmosphere aboard a rocket, the system has so far worked safely.

But these spacecraft spend almost all of their lives far, far from Earth. Not only are there technical challenges to powering a missile or aircraft with a nuclear reactor (especially if the aircraft is manned), but the Petrel will fly inside the atmosphere.

Nor is it clear why Russia needs a nuclear-powered cruise missile in the first place. Russia claims that because such a weapon has unlimited range, it can evade U.S. missile defenses designed to stop ballistic missiles descending from space rather than low-flying cruise missiles. Yet even if the Petrel was hard to detect and intercept, it would be too slow as a first-strike weapon.

It would be more useful as a retaliatory weapon. But as always with the nuclear Balance of Terror, it would be simpler to just build more ICBMs, armed with multiple warheads, to overwhelm anti-missile defenses. An ICBM can also reach its target within 30 minutes, compared to a cruise missile that would take hours.

Unlike an ICBM, a nuclear-powered cruise missile could potentially stay aloft indefinitely. But over whose territory would the radiation-spewing missile orbit? For how long? And why would anyone want a nuclear missile orbiting over their heads 24/7?