Did Ukraine Just Build a Cruise Missile That Can Stike 1000 Kilometers Away? 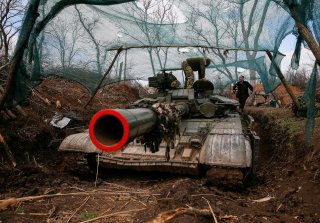 As the Ukrainian election heats up in April 2019, the incumbent President of Ukraine, Petro Poroshenko made a bold claim: Ukraine has made an indigenous cruise missile with a range of 1000 kilometers, capable of carrying a 150-kilogram warhead.

The strategic implications of such a weapon might be critical for Ukrainian defense planning. But what is the missile likely based on? How could it be an effective deterrent?

A common narrative is that these missiles would be used to strike Russian Anti-Access/Area-Denial (A2/AD) weapons, allowing NATO air and sea reinforcements to operate in event of conflict. This too is applicable to Ukraine.

However, a more crucial aspect may be delaying Russian reinforcements to a potential conflict. By striking infrastructure and troop concentrations, long-range cruise missiles may hinder reinforcements reaching the front line at critical points during battle.

The importance of second-echelon troops is even more important with regards to reconnaissance units, where forward deployed Russian troops have around a 1:1 troop ratio with their Ukrainian counterparts. This jumps to a 6:1 ratio with the addition of other troops in the region.

Deployment of a 1000 km cruise missile could prove a vital weapon for Ukraine to deter serious conflict with Russia.

The missile is likely a variant of Ukraine’s “Neptune” naval cruise missile. While details on the origin of the missile vary (Ukrainian sources insist that there are noticeable differences from the Soviet Kh-35 design, while Russian sources insist that all Ukraine has done was restart production of the Kh-35 design), the technical characteristics of the missile suggest that it could be Poroshenko’s missile. The Neptune is meant to be a low-flying cruise missile and has a warhead of around 150kg.

According to the Ukrainian source, the current stated range for the Neptune of 280-290 km was to allow Neptune to be exported to countries not in the Missile Technology Control Regime, of which Ukraine is a part. Later on, the article states that with the balance of weight between the fuel and the warhead, it would be possible to significantly expand the range of the Neptune missile if future requirements dictated it. Similar balancing between fuel capacity and engine efficiency allowed the range of the JASSM to be nearly tripled on the JASSM-ER variant.

That article was published in February 2019. It’s possible that the Ukrainian Ministry of Defense moved forward with plans to create an extended range land-strike version of the Neptune since then.