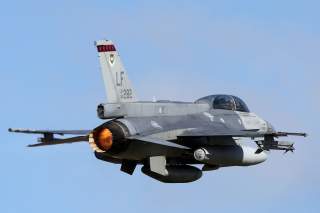 The interesting video in this post was recently uploaded by YouTube Channel thirdphaseofmoon and shows video in which UFO seekers Tim Doyle and Tracey Su capture photos of F-16s dogfighting a triangular aircraft over Area 51.

As reported by Mirror the fighter planes are seen zipping through the sky in an apparent routine training mission over the top secret military base Area 51 in a desert area in Lincoln County, Nevada.

Doyle and Su camped out some 12 miles away to snap pictures and videos of activity over its skies and didn’t see anything unusual when the military aircraft soared above.

But when they later combed through their photos they spotted the third aircraft which they described as a “triangular” object which appeared to be fighting against the F-16s.

“What in the world is this? It’s looks like some kind of triangular unmanned drone, because it’s definitely too small to have a person inside of it.

“And after looking at the pictures it definitely looks like the crafts are interacting with each other. It’s like a three-plane dogfight.”

As we have previously reported, last December the Pentagon has given The New York Times a video which shows an F/A-18F from USS Nimitz aircraft carrier – flown by Cmdr. David Fravor, a former CO of VFA-41 Black Aces, – encountering an unidentified flying object (UFO) in November 2004.