Did the U.S. Marine Corps Bail on Big Drones Too Early? 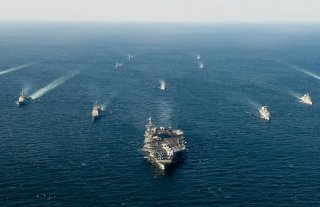 Earlier this year the United States Marine Corps opted not to go forward with plans to develop a ship-launched drone to serve in an airborne early-warning role. The Marines had been considering a variant of the in-development Marine Air Ground Task Force (MAGTF) Unmanned Expeditionary Capabilities drone—dubbed MUX—to fill an “eyes in the sky” role and carry radar to help manage air battles around amphibious groups.

In the end, however, the decision was made to cancel the program due to the fact that the weight of the radar limited the vehicle’s endurance. Instead, the Marine Corps shifted to add the sensor to a land-based vehicle.

Now that decision is being questioned.

Defense News reported that some analysts noted that such surveillance capabilities could be crucial in a potential fight with China. It is now unclear if the U.S. Navy and Marine Corps can find common ground in a drone that could operate off the flight decks of Navy warships.

At this point, it appears the Navy is still trying to find alignment with the Marine Corps when it comes to developing such a drone.

“Every strike group wants to know more and more and more about his battlespace,” said U.S. Navy Air Warfare Director Rear Adm. Gregory Harris during last week’s annual Tailhook symposium. “As we look at future vertical lift and the Marine Corps looks at their MUX or Medium Altitude Long Endurance system, [we’re talking] about how we can find synergy between the Marine Corps and the Navy’s pieces of the MUX/MALE program and our future vertical life (unmanned portion)—we want to bring that as far left as we possibly can in terms of synergy between the Navy and Marine Corps.”

However, some analysts have noted that breaking the MUX program into multiple systems could offer the advantage of spreading out capabilities, and relying on platforms already in production will speed everything along.

The Navy and Marine Corps are still working together on other drone programs and last month Logos Technologies announced that the Navy awarded the firm with a nearly $7 million contract to develop and deliver a wide-area motion imagery (WAMI) sensor for use with the Navy’s RQ-21A Blackjack drone. Logos Technologies’s new WAMI Blackcard sensor is a derivative of their BlackKite sensor.

The RQ-21A Blackjack is a small tactical fixed-wing UAS that can carry up to thirty-nine pounds (seventeen kilograms) and has a flight endurance of sixteen-plus hours per day (depending on configuration). It is currently the U.S. Navy and Marine Corps’ Small Tactical Unmanned Aircraft System (STUAS) program of record.

The drone uses a rear-facing push propeller design and has a twin tail boom, along with steeply-raked winglets. Although Blackjacks do not carry munitions, they operate as a group of five drones controlled by two ground controllers. As a group, they can cover quite a wide area, something important for both the Navy and Marines Corps when it comes to operating in the vastness of the Indo-Pacific region.