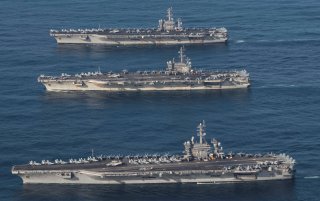 Did the Navy just lose two hundred ships? Possibly, according to critics of the recently unveiled administration budget request which substantially truncates Navy fleet expansion plans compared with the prior administration.

Just prior to the change in administration, Chairman of the Joint Chiefs of Staff Gen. Mark Milley did say that a “five-hundred-ship” Navy was still an “aim point,” while acknowledging that budget challenges may make that difficult to achieve. Since this time, however, plans to expand the size of the Navy fleet seem to be vanishing, leading some Congressional critics to say the existing budget proposal barely supports the status quo and completely dismisses the possibility of a Naval expansion.

Sen. James Inhofe, (R-Okla), the ranking member of the Senate Armed Services Committee, echoed this sentiment saying that the current budget, as proposed, is “only enough” for a status quo, three-hundred-ship Navy.

“Cutting a new destroyer, retiring ten ships early, fewer F-35Cs—these don’t seem to be strategic choices but rather last-minute haphazard cuts. So that’s what we’re faced with right now,” Inhofe said recently at a Navy and Marine Corps posture hearing. “We have often said the world’s the most dangerous right now of any period of my lifetime, and since the release of the 2018 National Defense Strategy, the threats have only gotten worse.”

There are several significant variables to consider as part of this equation. The U.S. Navy still does operate a larger number of carriers and destroyers when compared with China, however that margin is deteriorating at a very rapid pace.

“Every year we are not building new ships, we fall behind. Our fleet is aging pretty fast,” Sen. Rick Scott (R-Fla.) said.

The precise reasons for why the Biden budget is lower than hoped for when it comes to shipbuilding may not be fully known, however, if some insight can be gathered from his tenure as Vice President during the Obama administration, he may favor the White House’s position at that time.  During the Obama years, the Navy operated well below a 300 ship fleet, in part due to a belief that technological superiority in terms of long-range weapons, sensors and cross-domain networking could enable a numerically inferior fleet to prevail in a major engagement with China.  However, while the U.S. Navy may have had a marginal superiority over China regarding the technological sophistication of its fleet, that difference continues to erode quickly.

In an interview with The National Interest, Rep. Rob Witman (R-Va.) explained that despite the previous contention that the Chinese Navy had “quantity but not quality.” He added, “Well, they have quality now.”

Witman is among a group of lawmakers recently appointed to a House Republican China Task Force intended to help marshal and inspire bipartisan support for efforts to deter China.