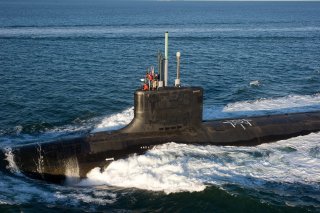 Russian officials claimed on Sunday that a U.S. Navy Virginia-class submarine was found in Russia's territorial waters near the Kuril Islands a day earlier. The submarine was reportedly detected by Russian anti-submarine forces operating near Urup Island in the Kuril chain. The coordinates of the U.S. Navy boat were then transmitted to a group of Russian Navy warships including the Pacific Fleet frigate Marshal Shaposhnikov.

"An American Virginia-class submarine was detected by Il-38 naval aviation aircraft and one of the submarines of the Pacific Fleet during the drills on the search and elimination of a hypothetical enemy's submarines in the areas of their possible deployment," an unnamed source told Russian state-backed news outlet TASS.

The Russian Ministry of Defense said that the American submarine was sent the message, "You are in the Russian territorial waters right now! Surface immediately!" The Virginia-class submarine reportedly did not respond.

TASS also reported that the U.S. military attaché in Moscow was handed a note on Sunday, and told that the Russian Defense Ministry reserves the right to undertake all possible measures in Russia's territorial waters to ensure the security of the Russian Federation.

The U.S. Navy says the incident did not occur, according to the Navy Times.

“There is no truth to the Russian claims of our operations in their territorial waters,” said U.S. Navy Capt. Kyle Raines, a spokesman for U.S. Indo-Pacific Command, in a statement. “I will not comment on the precise location of our submarines, but we do fly, sail and operate safely in international waters.”

Past Claims
This isn't the first time that Russia has suggested foreign military vessels have entered what it claims as territorial waters. Last summer, Moscow took notice of the presence of NATO warships in the Black Sea operating near Crimea.

In one of the incidents, elements of the Russian Black Sea Fleet were reported to have even fired warning shots at the Royal Navy guided-missile destroyer HMS Defender as the British vessel sailed near the Russian-controlled Crimea following a port-of-call visit to Ukraine.

Russia accused the Royal Navy of conducting a reconnaissance mission when the destroyer ventured three kilometers into Russia’s territorial waters. Russia annexed the Crimean peninsula in 2014, but the British government does not recognize Russia’s claim to the territory. According to the Russian military, a border patrol ship fired warning shots while a Sukhoi-24M bomber dropped bombs ahead of the Royal Navy vessel.

Much like this past weekend's incident, there are differing views on what actually occurred last July. The British Ministry of Defence maintained that HMS Defender was making a peaceful voyage, while it denied that any warning shots had even been fired.