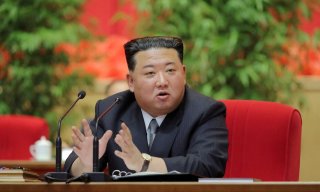 North Korea announced Thursday that it had formally recognized a pair of separatist regions in Eastern Ukraine. As a result, Ukraine has cut off diplomatic relations with North Korea.

"In the letters, she informed them that the DPRK government decided to recognize the independence of the People's Republic of Donetsk and the People's Republic of Lugansk and expressed the will to develop the state-to-state relations with those countries in the idea of independence, peace and friendship,” the Korean Central News Agency (KCNA) account said, per Yonhap.

Later in the day, also per Yonhap, Ukraine announced that it had severed diplomatic ties with North Korea.

The Ukrainian foreign ministry criticized North Korea for recognizing the "so-called ‘independence’ of the territories temporarily occupied by the Russian Federation in the Donetsk and Luhanks regions of Ukraine.”

"We consider this decision as an attempt by Pyongyang to undermine the sovereignty and territorial integrity of Ukraine, a gross violation of the Constitution of Ukraine, the UN Charter and the fundamental norms and principles of the international law,” the ministry added.

"In response to such an unfriendly act, Ukraine announces the severance of diplomatic relations with the Democratic People's Republic of Korea," the foreign ministry said, adding that any contact between the two countries had already been suspended, due to the various international sanctions on North Korea.

CNN reported back in May that North Korea may have learned lessons from the events in Russia and Ukraine regarding its recent nuclear push.

“That one of the very few countries to have voluntarily given up a nuclear arsenal is now under attack from the same country it gave its warheads to will not be lost on Pyongyang,” the CNN report said of Ukraine.

In addition, Kim Jong-un may conclude that he can “get away with more than ever,” with the world disgraced by the war in Ukraine.

“Never, ever surrender your nuclear weapons,” Andrei Lankov of Kookmin University declared to CNN, could be the lesson of the Russia-Ukraine war.

“There are some interesting, perhaps unintended consequences for the Western response against Russia in particular, which is that a Russia that has been completely isolated from the global economy and put under tremendous sanctions pressure. I think it has very few incentives to enforce sanctions against North Korea,”  Ankit Panda, a senior fellow in the Nuclear Policy Program at the Carnegie Endowment for International Peace, told CNN.