Disaster: What Happens When a Russian Nuclear Submarine Slams into a U.S. Sub 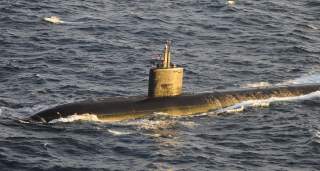